Alana Chenevert never really liked her given name. So around 2010, she started calling herself “Dodgr,” in tribute to Oliver Twist and her hometown L.A. baseball team.

“I decided I was just gonna go for it,” she says, calling from Portland, Oregon, where she’s staying with her girlfriend. The year Chenevert took on the name Dodgr was transformative in other ways, too: It’s also when she began getting serious about making music while wrapping up her undergrad degree in anthropology at Humboldt State University in Northern, California.

Until then, music had existed in the background of her life. Dodgr danced from age five through 13 and was an omnivorous listener, consuming everything from Missy Elliott to Nickelback. Even though she loved to sing and write songs, she thought she was better suited for a career as a doctor or maybe a music journalist. 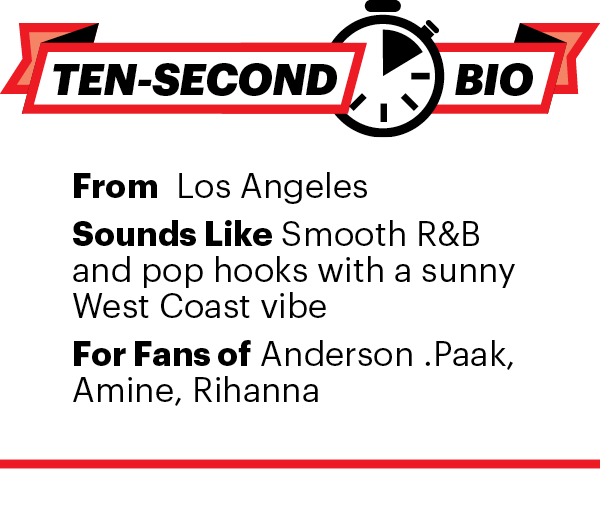 “School was really pushed on me, and I didn’t have that many people who believed in my voice. ’cause it’s different,” she says. “It wasn’t even until a couple years ago that my mom really supported this and heard my voice and thought it was beautiful.”

Still, singing and rapping were part of her private world, and she would write songs in private. Her passion for writing soon translated to pursuing a journalism degree (before tacking on a Bones-inspired physical anthropology degree in her final year). She spent her college years balancing her studies with work, so music was further sidelined in her life. That final year of college, when she began going by Dodgr, she finally felt comfortable sharing her work with the public.

“I would make it for myself and maybe let a friend or two hear it,” she says. “It wasn’t until I gained enough confidence in myself that I even decided to start releasing stuff and letting people hear it and get even more serious about it.”

After college, Dodgr’s first priority was financial stability, something that couldn’t be guaranteed from a music career. She began working at the North Post Journal in Humboldt County as a graphic designer, writing music reviews for the local paper on the side. Music was still a hobby — and thankfully for Dodgr, she lived in a house full of artists who could help bring her hobby to the masses. The Greenhouse, where she lived, also hosted shows by the likes of Kimya Dawson and Modest Mouse (“super low-key but big-time poppin’ indie folks,” as she describes it). It was there, on November 11, 2011 — at 11:11 p.m. no less — that the Last Artful, Dodgr took the stage for the first time.

“Over 300 people showed up to my house that day,” she recalls. “There were people trying to break in through the windows. Somebody got a tooth chipped during my first set.”

The local response to her show was immense, which encouraged Dodgr to release more music so she could have a reason to perform even more. Over the next couple of years, she began spending more time in Portland, performing for even bigger crowds while working day jobs at local dispensaries.

Since the release of her 2013 mixtape, 199NVRLAND, the Last Artful, Dodgr has caught the ears of both Mark Ronson and Anderson .Paak, with whom she has collaborated, as well as a number of other “top-notch” artists so big that she’s had to sign NDAs after working with them. “Let me just say that there’s some cool-ass people, and the experiences in the studios have been life-changing,” she teases.

Dodgr got a big boost when her sleek, Rihanna-esque single “Hot” landed a spot on HBO’s hit Euphoria, and now she’s hard at work on a debut album that’s a top priority for Interscope Records this year. “I’m a superunknown artist who was given that opportunity to shine,” she says. “I feel like I’m going to be popping up in not-so-low-key ways in 2020.”