American Plague: Racism Is Killing Black People and the Nation Itself

American Plague: Racism Is Killing Black People and the Nation Itself

It was just a week ago now that Derek Chauvin, then still employed as a Minneapolis police officer, pressed his left knee into the neck of George Floyd for what, on video, seemed like an interminable amount of time. It was a total of eight minutes and 46 seconds, nearly three minutes of which were after Floyd became unresponsive, long after pleadings like “Please, I can’t breathe” and “Mama” went silent.

Hennepin County’s district attorney, Michael Freeman, listed that precise timing in the criminal complaint he filed Friday. He charged Chauvin, the only one of the four officers involved who authorities has arrested thus far, with third-degree murder and second-degree manslaughter. This move didn’t slow down the protests a bit, perhaps because they are about more than Floyd’s murder. Political strategist Patrisse Cullors, the founder of Reform LA Jails and one of the co-originators of the Black Lives Matter movement, told Rolling Stone after Chauvin’s arrest that “In order to have true accountability we must defund the police and redirect those dollars to a national healthcare system. We have prioritized an economy of violence and terror over an economy of care.”

Cullors’ remark only underscored what a public-health crisis that police violence remains. That was increasingly evident in the preliminary details from the county medical examiner’s autopsy, appearing at the end of Freeman’s complaint: “no physical findings that support a diagnosis of traumatic asphyxia or strangulation. Mr. Floyd had underlying health conditions including coronary artery disease and hypertensive heart disease. The combined effects of Mr. Floyd being restrained by the police, his underlying health conditions and any potential intoxicants in his system likely contributed to his death.” (Attorney Benjamin Crump, who also represents the family of Louisville police victim Breonna Taylor, told reporters earlier on Friday that the Floyd family will be requesting an independent autopsy.)

The one arrest was never going to stop the swelling rebellion against systemically racist and homicidal law enforcement in this country. But before arresting or charging any of the other three former officers for their culpability, the prosecutor counted the victim’s own health as an accomplice.

If we are to examine what and who killed George Floyd, we have to talk about racism, America’s pre-existing condition. It is a cultural pandemic that has been steadily killing this country and, indeed, rotting away the very idea of America since chattel slavery began more than 400 years ago. Much like the people who were exploited for free labor in order to build this country, the cause of its death may have been more natural had racism not introduced certain comorbidities. 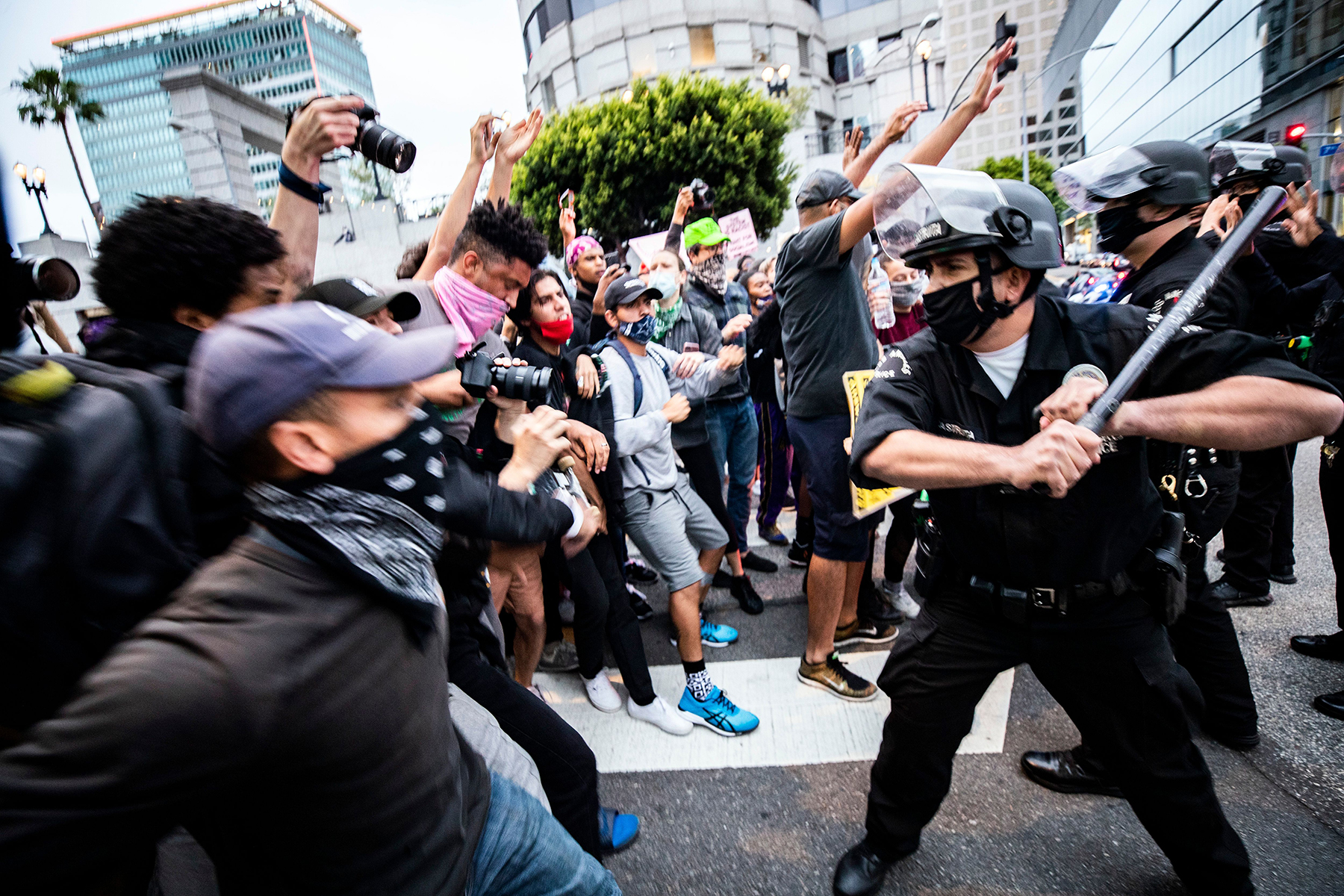 Right now, the coronavirus and the police are posing lethal threats to protesters. COVID-19 is still killing black people disproportionately, at about three times the rate of white people nationwide. The rates vary for police violence; black people in Minnesota are 20 percent of those killed by law enforcement, despite being only five percent of the population. Both the virus and the violence have also been weaponized against black folks in very public ways of late. How many people took risks with the virus on Memorial Day weekend, carelessly disregarding the provably inordinate risk to black communities? How many then joined the protests this past week and actually claimed that they’re fighting for black survival? How many cops keep shooting tear gas at people during a pandemic that strikes at the lungs, giving a newly tragic resonance to “I can’t breathe”?

The inordinate jeopardy black people are facing during the pandemic was not enough to keep restaurants and stores closed and people masked and isolating, but now municipalities are issuing curfews and businesses are boarding up because of what, still, have been largely peaceful protests against state power. And city governments are paying  police overtime out of strained city budgets to protect property, not people. This is all happening as white demonstrators armed assault weapons to force legislators to open bowling alleys and barbershops, and barely anyone in power batted an eye. Certainly, the police didn’t.

Alternatively throughout its history, America has suffered both from collective inabilities and refusals to fix or even recognize the problem of racism, particularly within law enforcement. Nowhere is this more evident, perhaps, than the addiction of cities to a system of policing that needs to be entirely reconsidered. Money that cities and states could use to rebuild communities is instead spent on more law enforcement.

While Republicans in particular promote police violence, politicians of every stripe alike drench it in funding, to the tune of more than $100 billion per year. In Minneapolis, a police force that killed black people at a rate more than 13 times higher than their white counterparts from 2013 to 2019 got a boost from the budget of Mayor Jacob Frey — who President Trump would now have you believe is some liberal afraid to get tough with protesters. The Democratic mayor’s budget at the end of last year increased the Minneapolis Police Department’s funding by $2.4 million for the purposes of hiring 14 additional officers. “We know that every dollar we give to MPD is a dollar we’re not investing in actual violence prevention,” a member of the Reclaim the Block Coalition told WCCO-TV before the passage of Frey’s $1.62 billion budget.

The corrosive nature of racism has been evident of late not just in policy, but in individual behavior, as well. Amy Cooper’s deception in that Central Park video, strangling her dog as she threatens to sic the cops on birdwatcher Christian Cooper, is as frightening as the blissful apathy of the white folks following President Trump’s urging to “re-open” America during an ongoing pandemic. Unemployment is skyrocketing, a housing crisis is around the corner, and the impact of all this calamity is worse for communities of color. Meanwhile, the entire nation sways to the wayward whims of the president’s Twitter account.

The white nationalism of this era, along with the grotesque nature of Floyd’s murder, have surely nationalized the street protests in a way perhaps unseen since the aftermath of the Ferguson uprising six years ago. The president, hearkening back to the days of his Central Park Five ad, repeatedly invited more violence and condemned protesters with the coded language of “thugs.” He even threatened to violate the Posse Comitatus Act and send the U.S. military into cities to quell citizen unrest with live ammunition. Having directly encouraged police violence during a 2017 speech to officers, Donald Trump saw unrest made violent largely by the very cops he’d told to treat suspects roughly. Trump later evoked the disgrace of evoked former LAPD chief Daryl Gates abandoning his post during the 1992 uprising — hiding inside his White House bunker briefly this weekend. Was he in any real danger? Please. This was reality-show grandstanding in the place of a president being present for his country Rather than lead, Trump hid and pretended to be the victim, even with the memory of Floyd’s murder fresh in our minds.

The president’s behavior during this crisis should remind us how unpatriotic white supremacy remains, for the people who want to improve this country are the ones on the streets, indignant about what has happened to Floyd, Taylor, and countless others. (We can speak of how supposed anarchists are making things more difficult for peaceful protesters, but the true “outside agitators” are the cops like Chauvin, who largely don’t live in the communities which they police.)

It is a testament to how much of America needs repair that throughout its history, violence has been so key to attaining progress and unity. Racism watered this country from its very seedlings, and it has had a long time to grow unimpeded. Ending its influence, both our very person and on public policy, is a demolition job. What we see in the current unrest are the learned lessons from a long history of revolution in this country, people who understand that virtually no rights have been secured without either committing violence or inciting it against their own bodies. This is no longer a question of whether or not enough white people will tolerate our deaths at the hands of police — or the coronavirus, for that matter. Black people are sick of dying without people caring. America is now ripping itself asunder because what is killing its black citizens is also rotting the nation to the roots.

Much like the faulty coronavirus death toll counts, the true casualties of police violence are incalculable. Weeks like this past one eat away at the spirits of black people, and at their very flesh and bones. Parents of black children have shed tears in justifiable fear, the stress of it all putting their own health in peril. It would be easy to merely blame the death gap between black and white Americans, which varies by gender, on unhealthier diets and lower incomes — though those are also influenced by systemic racism and play a role. But the grief and fear that black Americans carry, knowing that they cannot peacefully demonstrate for police reform (or abolition) without the very same powers that drove them to the streets escalating even further. We see it in the rampant and often unprovoked abuse being dealt out to protesters, bystanders, and journalists alike.

But Americans need look no further, if they can stomach it, than the videos of Floyd’s murder for evidence of how corrosive racism can be.Despite the Floyd family wanting escalated charges against Chauvin that reflect intention, it is more disturbing to consider that the former officer may not have intended to kill, but simply didn’t care whether or not Floyd died. Chauvin nonchalantly kept his hands in his pockets while his knee pressed the life out of Floyd. It only underscores the irrelevance of intention when committing a racist act. You don’t have to hate people. Racism means that you likely don’t consider them to be people in the first place.