Why the Fireworks Conspiracies Are So Believable

Why the Fireworks Conspiracies Are So Believable

Just past midnight on Tuesday, June 23rd, a man stepped outside his apartment building in the Grand Concourse neighborhood of the Bronx to retrieve the wallet he’d left in his car when he saw what he believes was a police officer in street clothes handing out fireworks to teens. The source, who requested anonymity fearing retaliation from the New York Police Department, is familiar with the NYPD and says he recognized the car that pulled up as an undercover police car in part because of the small antenna on top. “I saw there’s a couple of teenagers by the lobby, like five or six of them, and suddenly I see a cop pull up,” he says. “I thought, ‘OK, maybe this guy’s gonna stop those guys for doing fireworks because it’s been ongoing.’ I was surprised when I see him just pull up, open the back, and just start pulling out big boxes of fireworks. I keep passing by, next to him, and I see a shield, and his gun, so he gives me a look and I’m acting like I just see nothing. I go to my car, then I go upstairs and I say to my wife, ‘Wow, this thing ain’t gonna stop soon.’”

Fireworks are everywhere. New York complaint calls about them are up more than 20,000 percent for 2020. In Boston, calls were up more than 6,000 percent for the first week of June. In Syracuse, New York, and parts of Los Angeles, police reported calls had risen more than 300 percent from 2019, and general reports of the nightly noise stretch from Chattanooga to Omaha. In many places the noise has gone unchecked, leading people to question where the fireworks are coming from — and stories like the one from the Bronx are starting to circulate.

Over Father’s Day weekend, nearly a month into the George Floyd protests, with helicopters circling above New York and a pyrotechnic show shooting up from the sidewalks below, a conspiracy theory went viral on Twitter, alleging that the daily fireworks were “part of a coordinated attack on Black and Brown communities by government forces … meant to disorient and destabilize the #BlackLivesMatter movement,” according to a series of tweets posted by the author, Robert Jones Jr. It’s psychological warfare, he said, designed to stoke tensions among people of color and desensitize them to the sound of artillery fire that will come in the next phase of this operation.

The theory took off. Some of the tweets in the thread were liked and shared thousands of times. Other users pointed to fireworks being set off near police precincts, strange men distributing vanloads of fireworks in neighborhoods in New York as well as L.A., and video footage of New York firefighters setting off what appears to be a fountain firework outside one of their stations as evidence to support the idea that the fireworks are a government operation. (NYPD did not address the specific allegations made by our source, but a spokesperson said, “The conspiracy theory that the police are supplying the fireworks to our communities is false and absurd.”)

The following Tuesday, June 23rd, after calls from Brooklyn borough president Eric Adams to deploy community organizations rather than cops to address the problem, New York’s Mayor Bill de Blasio instead announced the formation of a 42-person law-enforcement task force to do undercover sting operations to trace the fireworks supply chain. “I warned you,” read a tweet from Jones.

While the Bronx resident who spoke to Rolling Stone does not think there is a government-led fireworks conspiracy, what he believes he saw suggests the police may not be innocent in the disruptive events, either. And as the incident illustrates, there are good reasons the theory has resonated so strongly.

The first may be simply that we find ourselves in a highly conspiratorial moment. Feelings of anxiety, powerlessness, and confusion have been shown to breed conspiracy theories, and according to Adam Enders, an assistant professor of political science at the University of Louisville who studies conspiracy beliefs, “When it comes to the coronavirus, everyone is on edge about their health, that of loved ones, and the economy.” 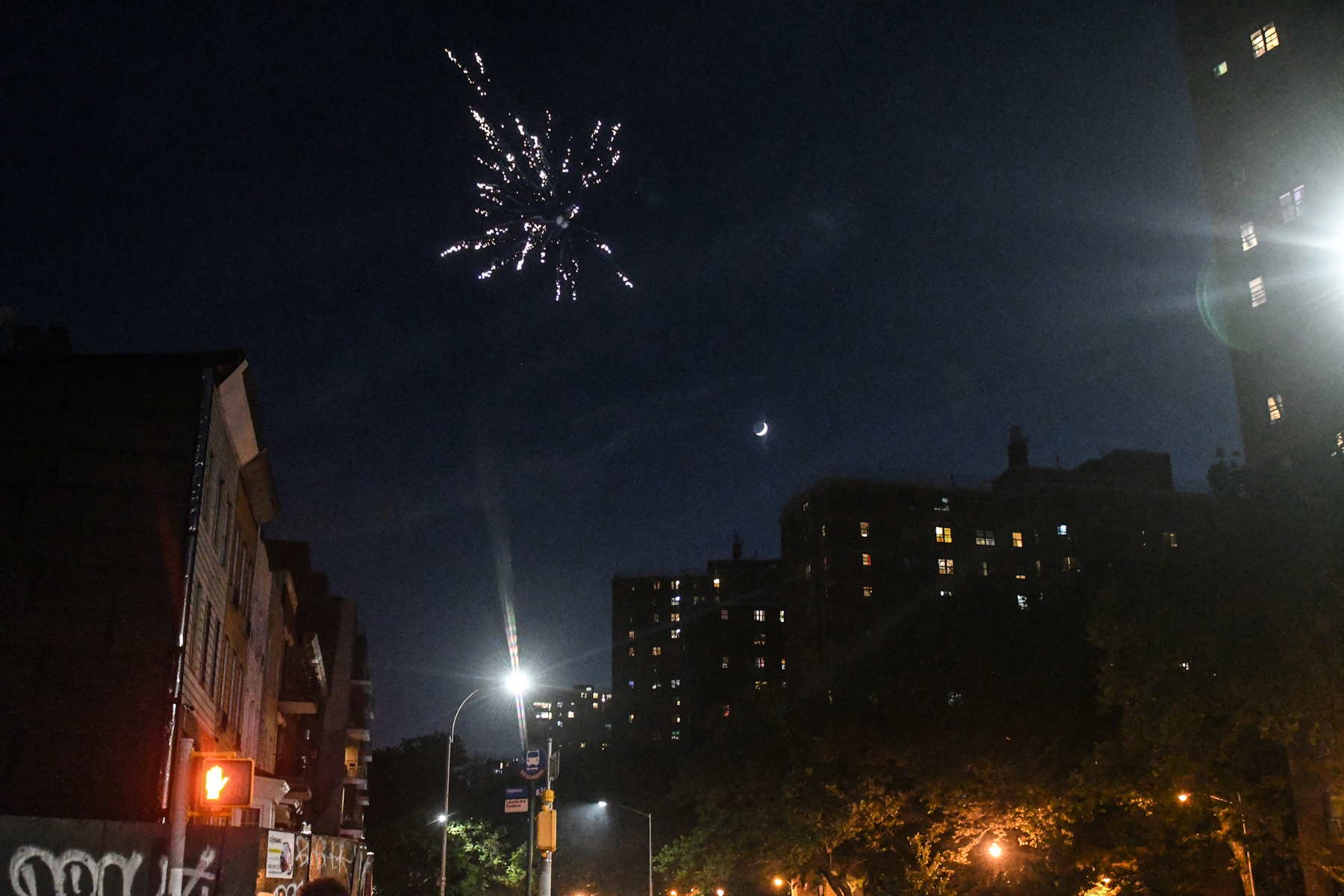 The result has been mass unfounded speculation about the origins and even the existence of the virus. Since then, we’ve seen a rash of killings of unarmed black people by the police, followed by the protests and a re-galvanized fight for racial justice. “For people of color, liberals, and supporters of the BLM movement and police reform, more generally, there is additional anxiety about structural inequalities — and systemic racism, specifically — that further compounds the psychological effects of the pandemic.” Enders notes that people who don’t support BLM may still feel increased anxiety, but for different reasons, like concern over the destruction of property during lootings. In other words, we are primed to be a nation of conspiracy theorists right now.

Then there’s the fact that the American government really is constantly abusing black people, often in conspiratorial ways. One of the strongest arguments for believing government actors could be executing a nefarious plot against black communities is that they’ve done it before — over and over again — from the Tuskegee experiment that left black men with syphilis intentionally untreated for decades; to COINTELPRO, wherein the FBI attempted to sow discord in the Black Panther Party; to the 1985 police bombing of radical black liberation group MOVE in Philadelphia; to the FBI surveillance of Black Lives Matter protests using spy planes both in 2015 and reportedly again earlier this month. “This isn’t such a wild claim if powerful governmental and other social forces have, in reality, intentionally subjugated particular groups, as has historically been the case for black Americans,” says Enders.

Patricia Turner, a professor of African American studies at UCLA and author of the book I Heard It Through the Grapevine: Rumor in African-American Culture, could have almost seen this one coming. “If you’d called me and said, ‘There’s going to be a proliferation of unexplained fireworks going off in communities of color; what do you think the reaction to that will be?’ I would have told you it will spark conspiracy theories that the government put them there,” she says.

Turner compares the theory about fireworks to the longstanding suspicion that the government infused illegal drugs into black neighborhoods — especially crack in the 1980s — either to carry out genocide or to stifle black male potential. Like drugs, fireworks arrive from the outside and are ostensibly used for enjoyment, but ultimately can cause harm to individuals and their neighbors, whether through physical injury or excessive noise. “It’s got all the components of a commodity that will trigger a kind of folk speculation,” Turner says.

Of course, even if the CIA did not traffic crack into black neighborhoods doesn’t mean law-enforcement agencies didn’t take advantage of the crisis to criminalize drug users and over-police black neighborhoods as part of the so-called war on drugs. People have complained on social media about NYPD officers being slow to respond, or standing by doing nothing about the fireworks. The Bronx resident says his wife called 911 last Saturday about the fireworks, because the racket was keeping their newborn awake, but no one showed up. Is it possible cops could be intentionally dragging their feet to prove a point amid weeks of nationwide protests against police brutality and calls to defund their departments? “I wouldn’t rule that out,” Turner says, noting that she has relatives who are black police officers. “If you are a member of the law-enforcement community and you’ve been tagged by all of these conversations of the last few weeks, and people are saying, ‘Hey why aren’t you doing more about the fireworks?’ I could see some ambivalence cropping up on their behalf. Of course, I have no way to prove that.” (NYPD did not answer a question about its handling of fireworks complaints.)

The most plausible theory for why nationwide fireworks sales are booming this year is that they’re a form of entertainment that’s still available during the COVID-19 pandemic. As people come out from being cooped up in strict lockdown and fireworks stands reopen, offering discounts ahead of July 4th, pyrotechnics are enjoying a boost in popularity as an outdoor, accessible, socially distanced activity during a global pandemic that has shut down many other summer plans, including the typical Fourth of July professional displays. “Americans aren’t traveling,” says Bruce Zoldan, CEO of Phantom Fireworks, a major nationwide retailer. “They’re not going to Disney World.… They’re not going to baseball games or other sporting events. The only option is a backyard picnic, maybe a few fireworks.”

The numbers bear that out. Consumer fireworks sales are “off the hook,” according to American Pyrotechnics Association executive director Julia Heckman. Phantom is doing so well it may soon exhaust its supply. Zoldan says daily company sales are up 100 to 300 percent compared with this time last year. “Remember at the beginning of the pandemic when you couldn’t buy toilet paper or any kind of disinfectant?” he says. “In a few days, you won’t be able to buy fireworks because the demand is so big.”

Phantom’s sales started rising as restrictions began lifting on states’ stay-at-home orders in late May. Heckman confirms the timing was industrywide. “Typically this week is where you’d see the uptick, but this year it began Memorial Day weekend,” she says, adding that she hasn’t heard any reports of cops or government officials buying up supplies and has no reason to believe they would be.

Heckman also points out that people thinking “professional” fireworks have appeared in their communities may be misled. Although she had not heard of the conspiracy theory, this is a key tenet — that the fireworks being set off on the street are the type seen in the Macy’s display or New Year’s Eve celebrations. Heckman says the aerial fireworks she’s seen in videos supposedly posted from New York explode nearly 200 feet in the air, and they are legal for consumers to buy in some states — although New York is not one of them. Fireworks for professional displays explode at 300 to 600 feet, and where the consumer fireworks business is thriving, display companies are on life support, because big shows are canceled and it’s a felony to sell off their heavily regulated explosives.

Questions still remain as to how impressive-looking aerial fireworks are streaming into cities and states where they’re illegal, and while one cop allegedly handing out supplies doesn’t indicate a full-on government conspiracy, it makes it harder to believe our nation’s newfound fireworks enthusiasm is simply the result of supply and demand. Zoldan points out that increased sales open more opportunities for black and gray market vendors, too. “I don’t know if people decided to take a ride out of town,” Heckman says, “Or whether there’s some enterprising individual who is buying these products in mass quantities and coming in and selling them to make a quick buck.”