Column: Homophobia Is Not an Asian Value

Column: Homophobia Is Not an Asian Value

by admin
in Entertainment, LGBTQ, overnight
0

Tan Seng Kee, a 62-year-old retired doctor and LGBTQ+ activist, recently filed a motion in Singapore’s High Court, asking it to order the city-state’s cabinet to revoke a colonial-era law that could imprison men for up to two years for engaging in consensual sex.

The law is rarely enforced, but it’s the symbolism that counts: despite gradual, progressive shifts in official rhetoric, Singapore remains one of the more conservative states in the region when it comes to LGBTQ+ issues. Taiwan, by contrast, was a pioneer in recognizing same-sex marriage in May 2019, to be followed by Thailand, which passed a civil partnerships bill in July 2020.

Asian critics of homosexuality have long argued that it is a Western behavior, superimposed upon Eastern cultures as a decadent, neo-colonial side effect of globalization. Even those who are not opposed to homosexuality tend to shrug their shoulders at what they believe to be a uniformly conservative continent when it comes to sexual politics. It’s just not Asian, many say. The public will never accept it.

Read more: Marriage Equality Comes to Taiwan in an Historic First for Asia

In fact, the widespread contention that homosexuality isn’t an Asian phenomenon is gloriously false. The Kama Sutra, written over two millennia ago, has a chapter of explicit instructions on gay sex. In imperial China, many Han dynasty rulers were bisexual or homosexual. Scholars Bret Hinsch and Li Yinhe note that tales of homoerotic relationships, such as those of Long Yang and Emperor Ai of Han, were widely known and valorized throughout Chinese history. Lesbian and gay partnerships were meanwhile ubiquitous throughout the Ashikaga and Edo era Japan, even under the most repressive, feudalistic rule of its political history.

If anything, it was contact with the West that steadily chipped away at this permissiveness in Asia towards same-sex relationships. Jijian, a pejorative Chinese term for men who have sex with men, arose at a time when Christian missionaries began spreading the idea that homosexuality was sinful. 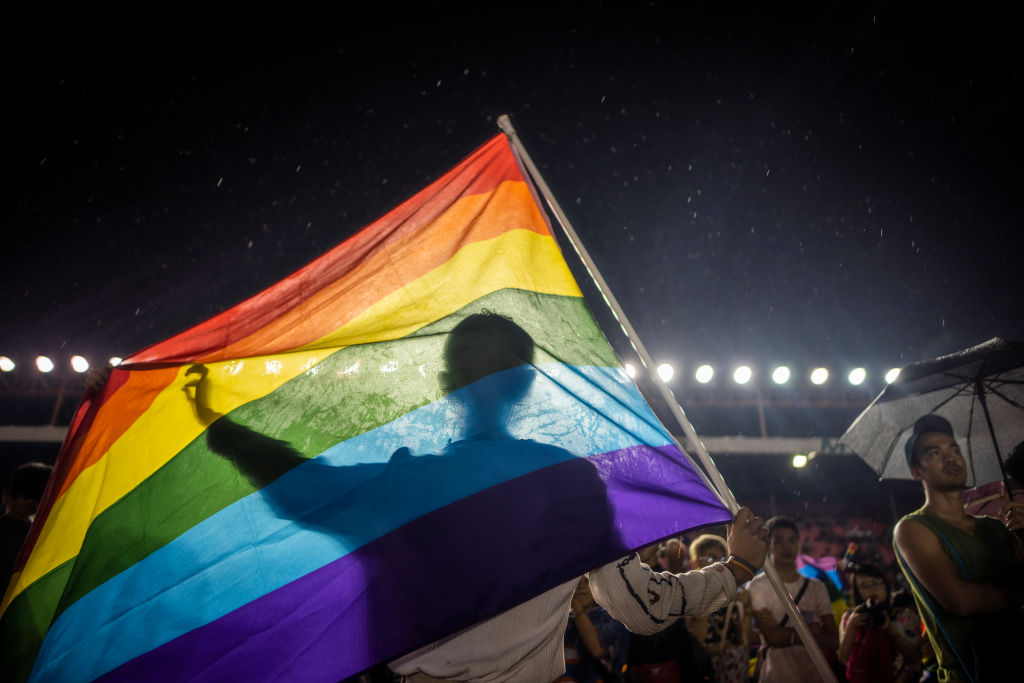 Filipinos participate in the annual Pride March on June 29, 2019 in Marikina, east of Manila, Philippines.

Such attitudes, unfortunately, became gradually entrenched as Asian states sought to court the favor of Western powers and win over critical religious intermediaries. The Meiji Restoration in Japan brought a roster of modernizations to the country’s economy but in some ways set the country back by cultivating a new cultural elite that aligned itself with conservative Western mores. By the late 19th century, the British Raj had criminalized sodomy and sought to outlaw the community of Hijra, despite the long history of these third-gender and transgender individuals on the sub-continent. British curricula and laws in the Raj propagated the view that the gender binary was the norm, and that those who deviated from cis-heterosexuality were to be regarded as the Other.

In 2020, religion is still used in Asia to bolster homophobic attitudes. But whose religion is it? Leading figures in Chinese Buddhism have spoken out about the need for tolerance towards homosexuality, saying that while heterosexual marriage is a custom, “customs can always be changed.” Taoism makes scant mention of same-sex relations, let alone prohibiting them. There are prominent Hindu deities who are gender-fluid. Even in the heavily Catholic Philippines, 73% of respondents to the Pew survey cited above said homosexuality ought to be socially acceptable.

There are also religious figures from India, Hong Kong, Indonesia, Japan, the Philippines and Sri Lanka among the 370 signatories of a recent declaration by the Global Interfaith Commission on LGBT+ Lives, which apologizes for religious teachings that have “caused and continue to cause deep pain and offense to those who are lesbian, gay, bisexual, transgender, queer and intersex.” Lending their names, too, are prominent Muslims, Sikhs, Buddhists and Hindus based in countries like the U.S.A. and U.K.

So there is nothing innately Asian about homophobia. Indeed, there is every reason to think that recognition of the rights of the LGBTQ+ population is in line with Asia’s stepping up to become a fulcrum of the 21st-century world.

Singapore’s founding father Lee Kuan Yew, and two-time Malaysian prime minister Mahathir Mohamad, were fond of emphasizing the phrase “Asian values” to describe the set of norms that made Asian states distinct from their Western counterparts. Indeed, Mahathir went so far as to assert that, “In Malaysia, there are some things we cannot accept, even though it is seen as human rights in Western countries … We cannot accept LGBT marriage between men and men, women and women.”

But while “Asian values” are generally understood to be socially conservative, there is no reason why they should remain so. Significantly, Mahathir’s activist daughter, Marina, was quoted by Malaysian media in 2018 as saying “LGBTs just want the same rights as everyone, nothing more.”

In other words, the legacy of colonialism need no longer frame Asian discussions about same-sex relations and gender fluidity. It would make economic sense for them not to: as the world’s economic powerhouse, Asian economies would benefit vastly from the surge in human capital and new ideas that a more inclusive civil society could bring.

But neither should change come because of some Western-inspired emancipation. It would be far better for the East will reconnect with its own traditions of tolerance and inclusivity, defying the stereotype that LGBTQ+ rights and the West go hand in hand.

Sign up for Inside TIME. Be the first to see the new cover of TIME and get our most compelling stories delivered straight to your inbox.