One of the cleverest ads I’ve ever seen from a music-streaming service arrived in April 2018 — and it was geared toward other business players, not consumers. Following years of strong growth for the record industry, labels had been facing up to the idea that annual increases in audio-streaming subscription revenue were about to slow down for the first time; they needed to start investing in new ways to attract customers to music streaming, be that via social media, video games, or smart speakers.

In the yearly music industry bible that is the IFPI’s annual Global Music Report, the leader of the audio streaming music space, Spotify, took out an ad celebrating its current subscriber numbers. But another ad from the relative upstart, Amazon Music, took a very different tack. Above an image of its signature Echo speaker, the company laid five words: 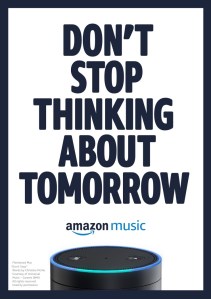 To its credit, Amazon Music has followed through on its own missive. The platform’s multi-tiered pricing strategy (including its premium-fidelity Amazon Music HD offering), its early courting of the older-than-40 music fan (now the fastest-growing new streaming subscription demographic), plus its smart recent entwining of its service with Twitch, prove that Jeff Bezos’s Spotify rival has a refined nose for what’s coming next.

Yet if Amazon Music has consistently been right about future trends, then it’s just given record labels serious cause for concern — by sending a clear signal that it believes music is about to sink down the average consumer’s priority list. We know this not only because Amazon Music just agreed to spend over $300 million to acquire podcast-creation company Wondery, but also because the announcement of that deal came complete with this carefully-phrased line (bolding mine): “This is a pivotal moment to expand the Amazon Music offering beyond music as listener habits evolve.”

Make no mistake, this is an insulting forecast for record labels and recording artists. It says music alone is no longer enough for the consumers we have, nor the consumers we want. Even if they’re consumers of a brand that very explicitly sells itself as a thoroughbred music service.

There is a degree of copycat corporate behavior behind Amazon Music’s acquisition of Wondery. Spotify has spent over $800 million on podcast companies in the past two years (inclusive of November’s $200 million-plus buy of Megaphone, and its massive $100 million Joe Rogan exclusive). This splurge drove Spotify’s share price to double across the course of last year. Its impact on Spotify’s analytics has also been dramatic: In $SPOT’s Q3 2020 results, it revealed that 22% of its global active users engaged with podcast content in the three months to end of September. That’s over 70 million people.

Amazon will also know, just like Spotify, that global licensing negotiations with major music companies swing round every two or three years, and that the more its users are engaging with podcasts, the less they’re engaging with music — and that the less they’re engaging with music, the less power and leverage Universal, Sony, and Warner get to wield during these show-downs. (Remember: Research from Edison shows that music keeps losing share of total U.S. consumer listening hours — while spoken word, driven by podcasts, keeps gaining share.)

For the music industry, perhaps the most damning aspect of Amazon Music’s $300 million-plus buyout of Wondery is a consideration on what else it could have spent the money on. Wondery ultimately has one standout podcast IP hit (Dirty John, which became a big TV series). Taylor Swift has many more hits than that — and the masters of her first six albums recently sold for $300 million to Shamrock Capital. Likewise, Bob Dylan’s entire song catalog sold at the end of last year for somewhere upwards of $300 million to Universal Music Group.

Why wasn’t Amazon Music interested in these purchases? Indeed, why was it so uninterested that it didn’t even bother joining the bidding table?

Granted, the Taylor Swift option would have invited a major PR headache into Jeff Bezos’s life. But, this fact aside, it shows that a sum of $300 million could easily have snaffled Amazon the rights to an evergreen, blockbuster artist’s catalog — which Amazon could then make “only available on Amazon Music.” This is precisely the exclusivity strategy Amazon follows for its Prime Video service: licensing, acquiring, and building movies and TV shows that you can’t find anywhere else. Indeed, in the TV streaming space right now, the really big bucks are being spent on locking down perpetually popular, re-watchable catalog shows — be that Friends, The Office, Seinfeld or The Big Bang Theory — as platform exclusives.

Maybe Amazon rejected the idea of ploughing a similar furrow in music for fear of upsetting its biggest suppliers, the major music companies. Yet this argument doesn’t hold much water on further examination because: (a) Saleable music catalog rights like Swift’s or, to give another example, Neil Young’s, aren’t currently ending up in the hands of Universal, Sony and Warner very regularly anyway; and (b) Amazon Music literally beat Sony Music — which has its own high-investment podcast strategy — to the Wondery deal, which would hardly have left the world’s second biggest record company in happy spirits.

Considering the accelerative affect of Joe Biden’s looming tax plans on artists currently selling their copyrights, Amazon had a once-in-a-generation opportunity to spend its $300 million on making a giant splash in music rights ownership. In one fell swoop it could have significantly differentiated its service from the likes of Spotify by offering exclusive access to one of the biggest artists in the world.

The fact Amazon chose not to do so, and instead deployed a nine-figure lump of capital into spoken word content, is not a positive sign for music rightsholders (or their investors). Clearly, Amazon is still “THINKING ABOUT TOMORROW” — but it’s a tomorrow where music is a second-class citizen in the broader entertainment space.

Tim Ingham is the founder and publisher of Music Business Worldwide, which has serviced the global industry with news, analysis, and jobs since 2015. He writes a weekly column for Rolling Stone.