by admin
in Capitol, Culture, Culture News, Entertainment, The Capitol
0 A man photographed gleefully carrying Nancy Pelosi’s Speaker of the House lectern and the “QAnon Shaman” who featured prominently during the pro-Trump mob’s raid on the Capitol were both arrested on charges stemming from the incident.

Adam Christian Johnson was booked into a Pinellas County, Florida jail Friday night on a first degree felony charge related to the ransacking of the Capitol. According to the Department of Justice, Johnson was charged with one count of knowingly entering or remaining in any restricted building or grounds without lawful authority; one count of theft of government property; and one count of violent entry and disorderly conduct on Capitol grounds.

In the viral photograph from Wednesday’s raid, a man authorities believe is Johnson was pictured smiling and waving while carrying around Pelosi’s lectern like a trophy; Pelosi’s office was broken into and vandalized during the Capitol siege. The status of the lectern is unknown.

Police records state that the 36-year-old Johnson is a resident of Parrish, Florida. According to voting records, he is not affiliated with any major political party, and he voted only in the 2004 and 2020 presidential elections, NBC Miami reports. 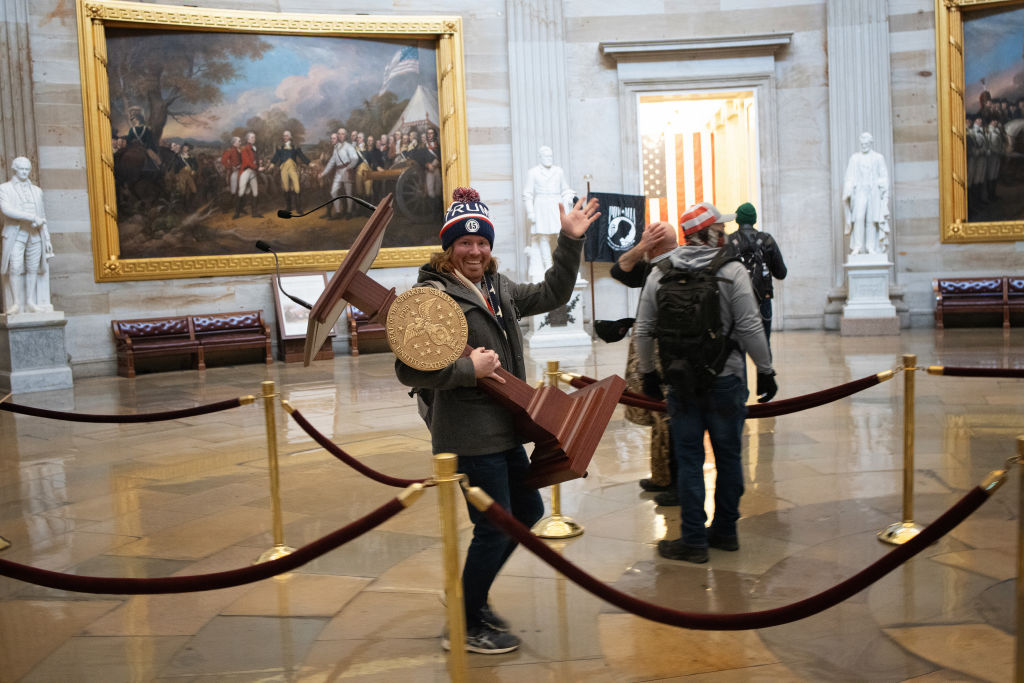 The Department of Justice also announced charges against the Arizona man dubbed the “QAnon Shaman,” who was apprehended Saturday. “Jacob Anthony Chansley, a.k.a. Jake Angeli, of Arizona, was charged with knowingly entering or remaining in any restricted building or grounds without lawful authority, and with violent entry and disorderly conduct on Capitol grounds. Chansley was taken into custody today,” the Department of Justice wrote.

“It is alleged that Chansley was identified as the man seen in media coverage who entered the Capitol building dressed in horns, a bearskin headdress, red, white and blue face paint, shirtless, and tan pants. This individual carried a spear, approximately 6 feet in length, with an American flag tied just below the blade.”

Federal authorities have so far arrested and charged over a dozen people (and counting) following the Capitol raid; those charges include knowingly entering or remaining in any restricted building or grounds without lawful authority, violent entry and disorderly conduct on Capitol grounds and theft of public property or records, which — thanks to an executive order that Donald Trump pushed through as president — carries a punishment of up to 10 years in prison.