President Trump appears to be out of options in his quest to con his way into a second term in office. The court challenges didn’t work. Pressuring Republican politicians to hold up the certification of the election results didn’t work. Inciting a mob of thousands of his supporters to storm the U.S. Capitol building didn’t work. As things stand currently, Joe Biden is still scheduled to be sworn in as president on January 20th.

But Donald J. Trump isn’t one to give up. No, he’s going to “fight like hell,” just like he told his supporters before they attacked the Capitol last week. He’s still got a solid five days to drum up another ill-fated scheme to stay in office, and he’s calling in the big guns. Mike Lindell, the MAGA-friendly affordable bedding entrepreneur also known as the MyPillow guy, was seen entering the White House on Friday. 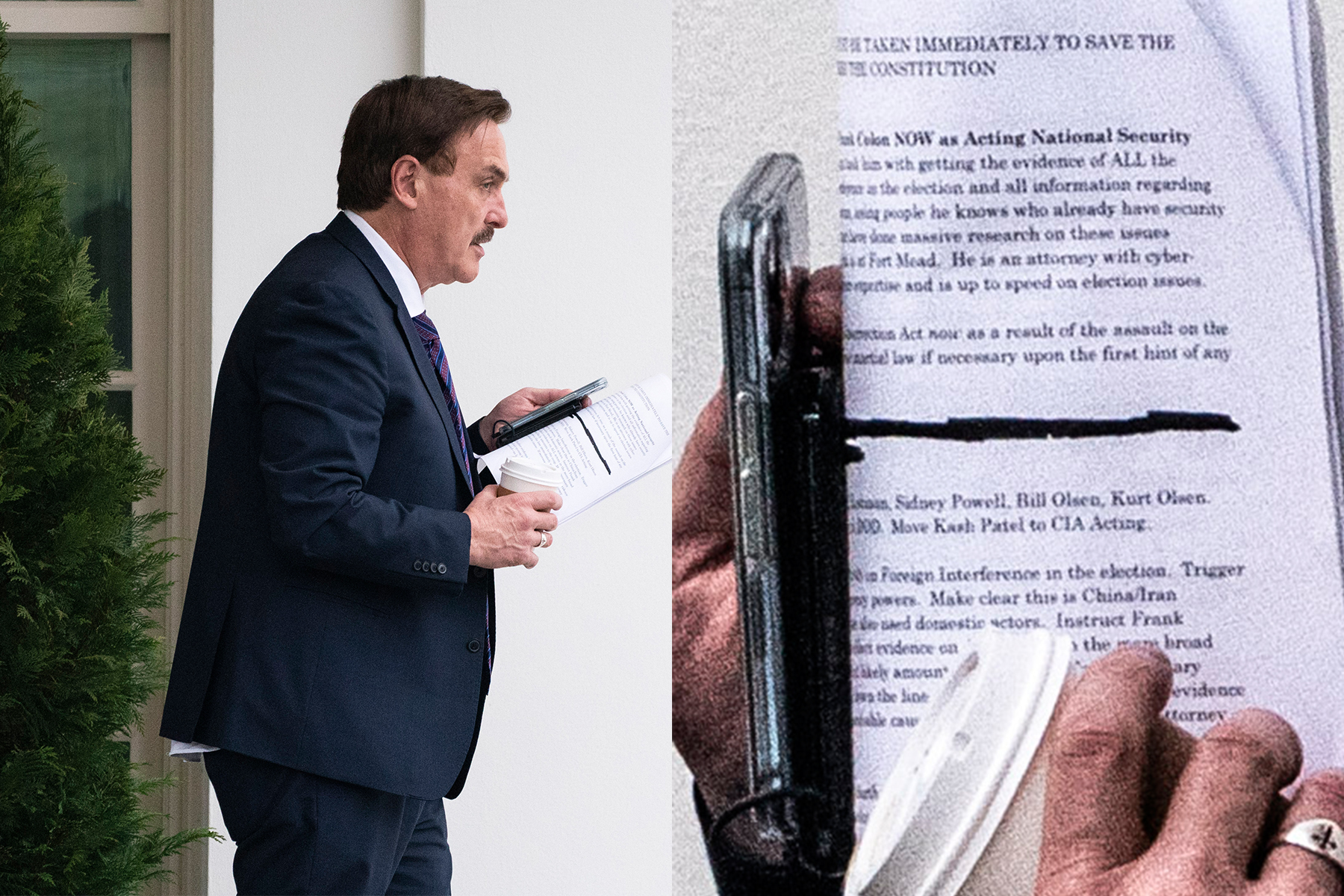 Now why, exactly, is Trump spending his final days in office meeting with the CEO of a pillow company? We don’t have to guess. Lindell left his notes exposed as he was heading into the White House, and it looks like he and the president were set to talk about something related to … steps to be “taken immediately to save” … something, something … “Constitution.”

“…Insurrection Act now as a result of the assault” … something, something … “martial law if necessary upon the first hint of any…”

So just to reset where we’re at here: As states are struggling to inoculate their citizens against a relentless pandemic that has killed nearly 400,000 Americans, and as the nation continues to reckon with how a violent mob of extremists was able to infiltrate the Capitol and kill five people in an attempt to overthrow the government, the president of the United States is meeting with a pillow salesman to discuss the possibility of instituting martial law. Sound about right.

This is far from the first time Trump has turned to Lindell, maybe the president’s most ardent supporter from the business world. The MyPillow guy has appeared at several of the president’s rallies, and even after last week’s insurrection maintained that Trump would remain president for another four years. (Lindell described the riot in the Capitol as “very peaceful,” which will be great news for the five people who died.) He’s also advised the president on Covid-19, and reportedly helped inspire Trump’s promotion of an exotic plant extract as a cure. (Lindell acquired a financial stake in the company that produces the product shortly before pushing it to the president.) Trump even invited Lindell to speak during a coronavirus task force briefing from the White House Rose Garden. “Boy, do you sell those pillows,’ Trump said as he introduced him.

Trump bringing Lindell into the White House on Friday shouldn’t come as a surprise, then, which is probably more ludicrous than the visit itself. At least we have a better idea about the nature of the “many calls and many meetings” that have made up the entirety of Trump’s recent daily schedules.