Wuhan One Year After Lockdown

Wuhan One Year After Lockdown When authorities came to Dr. Liu Chun’s hospital in the central Chinese city of Changsha with a request for 130 volunteers, it took just two hours for all slots to be filled. As a respiratory doctor specializing in ICU patients, Liu felt it was her duty to join the group of medical workers summoned 340 kilometers north, to Wuhan, where rumors of a mysterious pneumonia-like illness had been circulating for weeks. At first, Liu, 48, wasn’t terribly worried. Her husband and 12-year-old daughter were supportive; she didn’t bother telling her elderly parents of her plans.

But when she arrived in Wuhan on Feb. 8, 2020, she saw panic on the tear-streaked faces of her team members. One colleague was busy scribbling his will. Female staff had been instructed to cut their hair brutally short and men to shave it almost entirely.

“I was a little nervous,” she tells TIME.

Liu was charged with setting up a field hospital for COVID-19 patients outside Tongji Hospital in Wuhan. The city of 11 million had been sealed since Jan. 23 in an unprecedented lockdown that was to last 76 days. Officials ordered Liu to accept 50 patients within hours of her arrival, despite a dire shortage of medicine, PPE and ventilators.

It was only then that the severity of the disease became apparent. Liu would check on patients and return within an hour to find they had quietly passed.

“It really shocked me,” she says. “We began to call it the ‘silent killer.’”

She spent a lot of time calming and counseling terrified nurses. “I began to feel the burden of looking after everyone,” Liu recalls, while fearing for her own safety, even in a hazmat suit. Whenever a bead of sweat would drip from her cheek into her mouth, “I would get that salty taste and briefly fear that I’d been contaminated.”

Liu was among the first clinicians to confront COVID-19, and the panic and confusion she felt one year ago has sadly now burdened frontline workers around the globe. As Wuhan marks the first anniversary of its unprecedented lockdown, the city’s experiences are the cause of both hope and caution as the virus again takes hold in the country where it was first discovered. 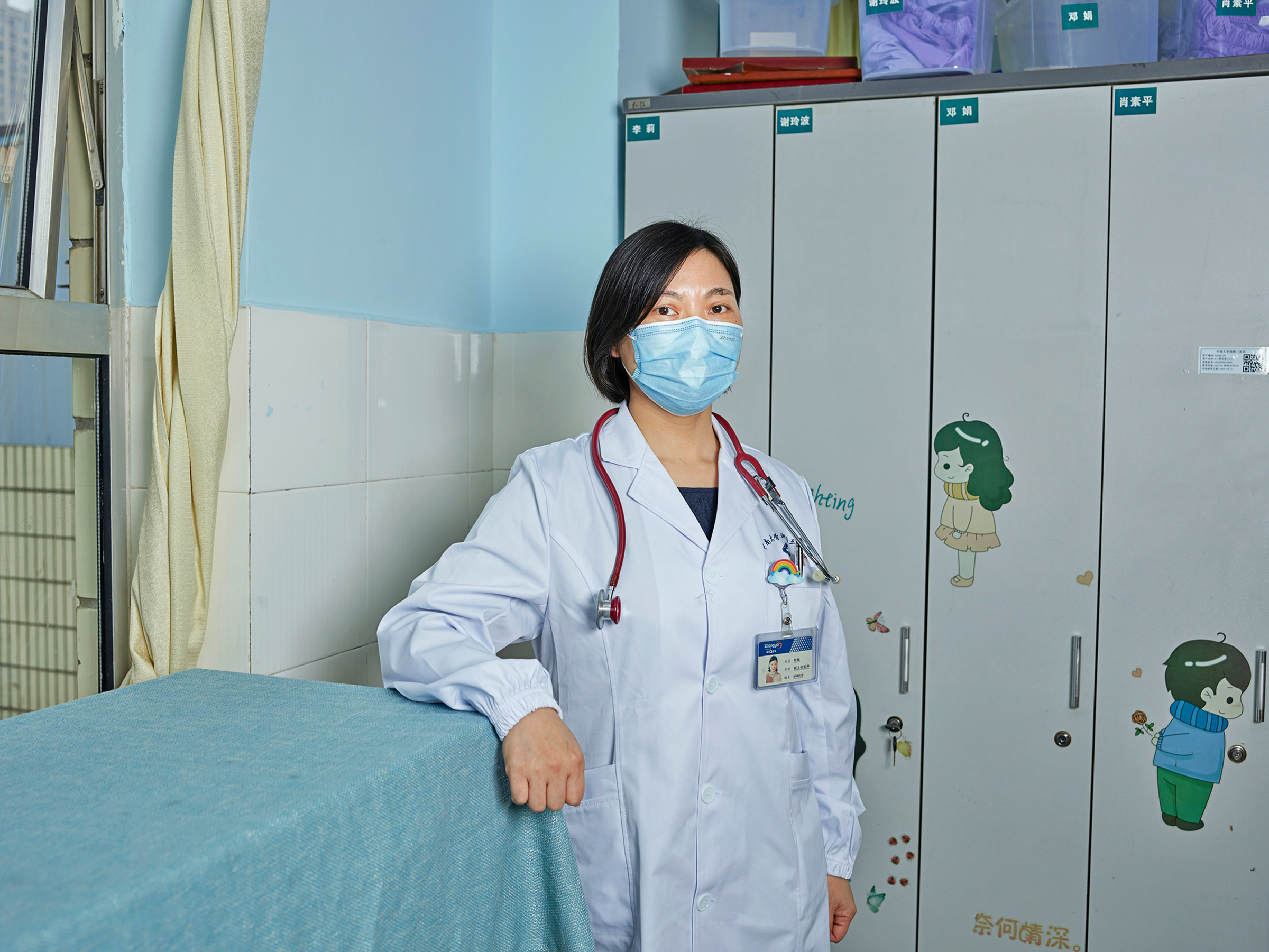 China has enjoyed months of relatively low coronavirus figures, but it recorded 222 new coronavirus cases on Jan. 21, following 223 on Jan. 20 and 133 the day before that. The new more infectious U.K. strain has also been detected in at least four cities. This comes just before the Lunar New Year festivities, when migrant workers all over China expect to head home to celebrate the holiday with their families. The movement of holidaymakers, involving some 200 million people, is humanity’s biggest annual migration. This year, it could be a potentially catastrophic spreader of disease.

The government is handling the resurgence with trademark ruthlessness. More than 23 million people have been ordered to remain inside their homes in northern China to stymie new outbreaks—double the number confined in Wuhan when the pandemic first erupted. A temporary quarantine center capable of housing 4,000 suspected cases has been thrown up outside the city of Shijiazhuang, just under 300 kilometers southwest of the capital Beijing. Its residents—like those of two other major cities—are forbidden from venturing outside.

According to state media, some 20,000 residents of 12 villages near Shijiazhuang were rudely awoken by sirens early last week and bused to government-run quarantine centers. Business magazine Caixin reported that in one district of Shijiazhuang, an old man was tied to a tree after venturing out to buy cigarettes, prompting the suspension of local officials.

Millions of people in five Beijing neighborhoods have now been ordered not to leave the city and to report for testing after two cases of the new variant were discovered. Shanghai meanwhile reported three cases on Thursday and has mandated the testing of all hospital staff. Arrivals from domestic high and medium-risk areas of the country are also obliged to undergo 14 days quarantine.

Zhang Wenhong, head of the city’s COVID-19 response, told reporters “These cases reminded the public that the virus has never been away from us and epidemic prevention and control will become a new normal.” 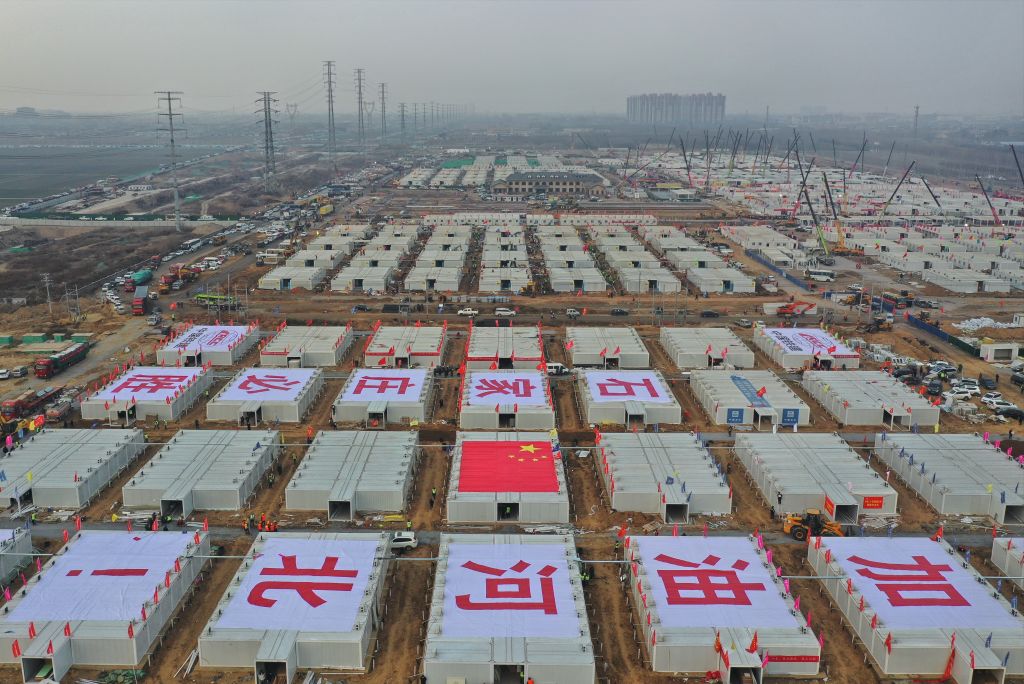 The resurgence has rendered Wuhan’s anniversary especially sensitive for the ruling Chinese Communist Party (CCP). Unhappy with accusations that officials bungled the handling of the outbreak’s early stages and silenced whistle-blowers, the party has sought to rewrite the past year as a tale of decisive courage under strongman President Xi Jinping.

Already, there is a cavernous exhibition hall in Wuhan commemorating the lockdown, with holograms of medical staff, letters from front-line health workers and a replica of a mass quarantine site just like those now being hastily erected in Shijiazhuang. A towering photo of Xi takes pride of place by a timeline of the measures he is said to have personally taken to stem the virus’ spread. In fact, Xi was neither seen nor heard during the early stages the outbreak. Premier Li Keqiang was the public face of Beijing’s response, while on the ground the undisputed heroes were everyday people who kept shelves stocked and bellies full.

Qian Ranhao was in charge of a distribution hub for online retailer JD.com, just 3 miles from Wuhan’s Jinyintan Hospital, where some of the first COVID-19 patients were treated. He was tasked with dispatching vital supplies of masks, drugs and disinfectant to the hospital each day, sleeping in the warehouse each evening to avoid taking the virus home to his heavily pregnant wife.

“She was nervous about me because I was on the street,” Qian tells TIME. “Even when I did return eventually home, we made sure to stay in different rooms.”

Qian’s son was born safely in August, but countless tales of tragedy have been expunged from the official account. The CCP’s already formidable talent for rewriting history has been honed even further under Xi, who has removed presidential term limits and fostered a cult of personality. In recent weeks, censors have scrubbed terms like “first anniversary” and “whistleblower” from Chinese social media, where paeans from corporate sponsors exalting Wuhan’s remarkable sacrifice and recovery are instead plentiful. 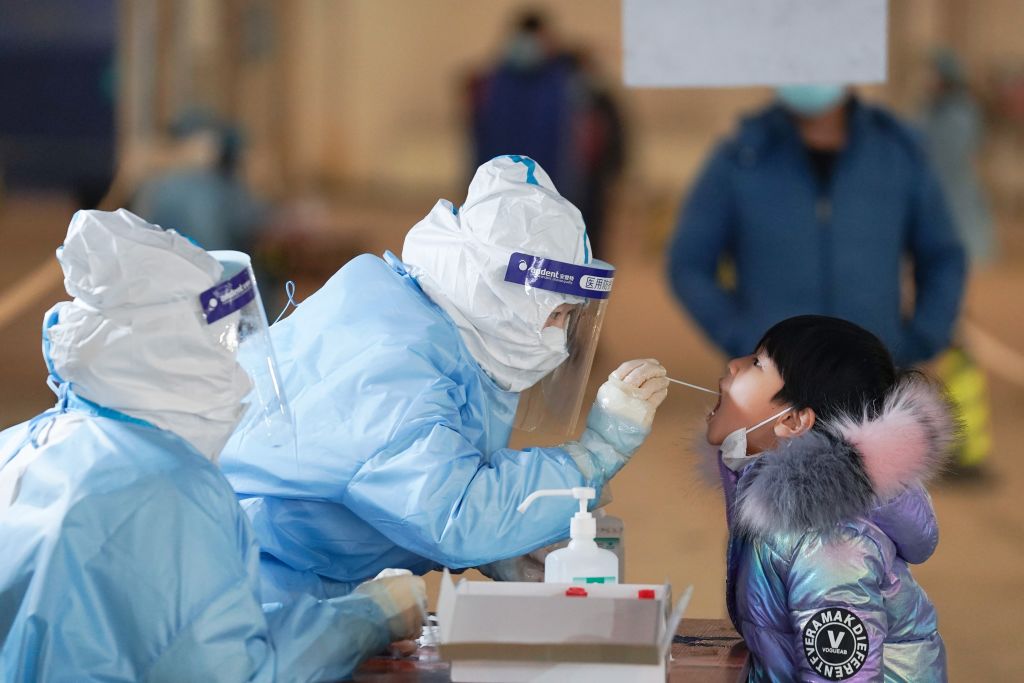 A medical worker collects a swab sample from a child at a COVID-19 testing site in Daxing District of Beijing, capital of China, Jan. 20, 2021.

The GDP of Hubei province—of which Wuhan is the capital—fell 39.2% in the first quarter of 2020, but recovered strongly to post a mere 5% contraction over the cataclysmic year. Across China, official data suggests GDP grew 2.3% last year, though the economy has been extremely unbalanced. Speaking at a December forum promoting economic development along the Yangtze River, which runs through Wuhan, Wang Zhonglin, the city’s top official, entreated the residents not to “slow down efforts to work toward becoming an international metropolis.”

That the message is being painstakingly curated and controlled is underscored by last month’s sentencing to four years in prison of Zhang Zhan, 37, a citizen journalist who had chronicled Wuhan’s lockdown. Scientists are also under strict orders not to report anything that may corroborate the belief that the virus originated inside China. A WHO team belatedly arrived in Wuhan last week to investigate the source of the coronavirus, but it’s uncertain how much freedom they will have to visit places they deem of interest following their two weeks quarantine. Two of the party were denied entry after testing positive for COVID-19 antibodies.

The government has meanwhile unveiled sweeping plans to vaccinate 50 million people before the Lunar New Year holiday in mid-February, and has so far managed to inoculate 10 million. State employees have been expressly forbidden from traveling over the holiday, and officials have urged everyone else to avoid it if possible. That’s a tough ask for the many millions of casual workers for whom the holiday is their only opportunity each year to reunite with loved ones.

Some 1.7 billion trips are expected during the festival, according to China’s Transport Ministry. That represents a 40% drop on 2019 figures, and a new rule requires travelers to present a negative nucleic acid test upon arrival at their hometowns. Nevertheless, one year after the start of the Wuhan lockdown, officials must be nervous.

Gang Fang, assistant professor of biology at NYU Shanghai, says the potential for seeding outbreaks is very real and officials are well aware of the stakes.

“If officials don’t control cases in their local area they will lose their job and political career,” he tells TIME. “Controlling the virus is their most important responsibility right now.”