Europe, with its varied history of conquerors and conquests, unsurprisingly, has plenty of beautiful old structures with a story to tell: a few dating back centuries, some with royal lineage, and others with a more unconventional past. Listed, heading westwards from the crossroads of Asia and Europe, here are some of Europe’s most classic bucket list hotels that you must stay at for a once in a lifetime (or return!) experience. 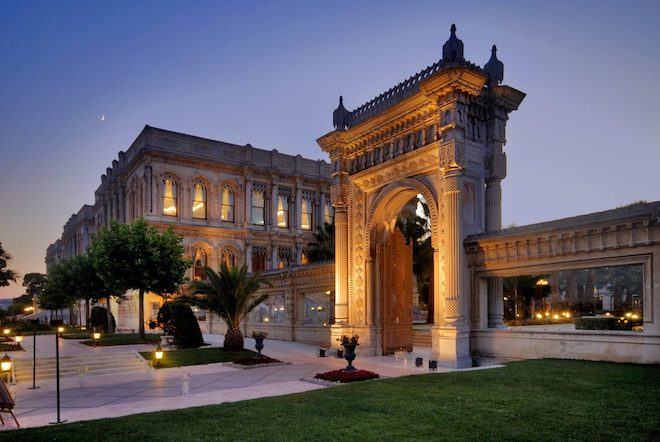 With the Ottoman Empire lasting over six centuries, and ruling the better half of Europe for a sizable part of that period, you would expect this powerful reign to have left plenty of glamorous structures. The Ciragan Palace is one of the last such relics – it’s the last palace built by the Ottoman Empire. Now a Kempinski Hotel, the palaces oozes Ottoman extravagance – and the Ottomans were an empire that definitely enjoyed the finer things in life! The epitome of luxury in the bridge between east and west, the hotel overlooks the Bosphorus offering sweeping views. With a curious construction history that includes multiple versions of a summer villa that were built and destroyed, as well as a fire, it has been a Kempinski hotel since 1991, and is in fact the only Imperial Ottoman Palace & Hotel in the city. By way of a new building next to it constructed in 1987, only a few of the hotel’s 303 rooms are actually located inside the Palace (namely, the Palace Suites) with the remainder in the new wing. Unlike most of the other entries in this list, the current structure at Gresham Palace has no direct royal or noble links (although a palace apparently once stood on the grounds). The construction of this magnificent Art Nouveau exterior was commissioned by the Gresham Life Assurance Company in 1906. Having been left in a decrepit state post-World War II, when it was used by the Red Army as barracks, the Four Seasons Hotels and Resorts oversaw the restoration of the palace in a partnership with Gresco Investments Limited, who helped raise the funds required for renovations, and the palace opened as a Four Seasons hotel in 2004. Eclectic mosaics, stained glass, and ironwork decorations adorn the facades and windows of the building which sits overlooking the Danube, with direct views over the city’s top attractions including Chain Bridge, Buda Hills, the Royal Castle and the Fisherman’s Bastion. 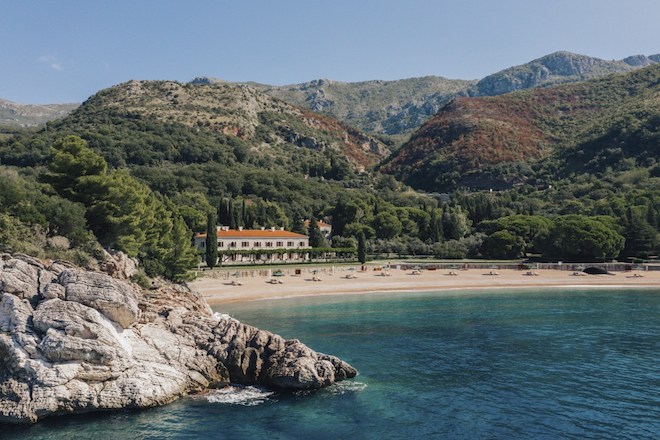 The main resort of Aman Sveti Stefan, formerly the fortified 15th century fishing village of Sveti Stefan, itself could have made this list, with its 600-year-old red-tiled roofs and cobbled lanes on the islet just off the shores. But nearby Villa Milocer on the mainland, once the summer residence of Queen Marija Karadjordjevic, is arguably the more fascinating of the two that make up the 80-acre estate. The Villa, built in 1934, is set just a short distance from Sveti Stefan Island, and houses only 8 rooms. It also fronts semi-private King’s Beach, flanked on either side by the iconic pink-hued sand Sveti Stefan Beach that connects to the islet, and the incredibly private Queen’s Beach with a standalone wellness facility. Unlike Sveti Stefan Island, the Villa is open all-year-round and is popular for private weddings and events. A 15th century Venetian palazzo to noble families, including at one stage the Doge of Venice, The Gritti Palace is not only Venice’s most striking hotel, but one of the world’s most renowned. Overlooking the Grand Canal in the floating city, this noble hotel with an unassuming Venetian-Gothic facade flawlessly merges old-world opulence with a sense of place once you step inside to its Renaissance-inspired interiors. Not much about its lavish decor is subtle; it’s old world luxe to the core, and why not? The hotel has been the centre of inspiration to quite the number of literary and artistic works over the years. Among its 21 epynomous suites that hint at its claim to fame are the Ernest Hemingway Suite and the John Ruskin Suite (he composed ‘The Stones of Venice’ here); multiple generations of elite members of society and prominent figures of art, history and literature have called The Gritti Palace their home at one stage of another, a list that includes Peggy Guggenheim, Humphrey Bogart, Elizabeth Taylor and more. 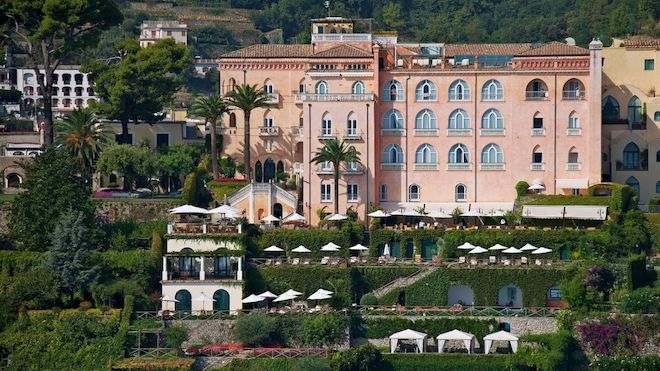 Tucked away 1,000 ft above sea level, high on the hilltop village of Ravello on Italy’s famed Amalfi Coast, Palazzo Avino’s history dates back to the 12th century, when it was built as a private villa for a noble family of its time. The palazzo, with its remarkably distinct pink hues, was first converted into a hotel in the early 20th century, when Amalfi and Ravello became a hotspot for international visitors, from artists and poets to presidents and prime ministers to kings and queens alike. In its current incarnation, the palazzo re-opened as a hotel in 1997 after a meticulous restoration following decades of ruin. Some original rooms, like the entrance hall, a small bathroom and a cellar in the restaurant still remain. Although the structure and its verdant walls and gardens remain iconic, there is no doubt that the real star is the view that is afforded to guests from the palazzo’s prominent position perched overlooking the unparalleled coastline of the Mediterranean. 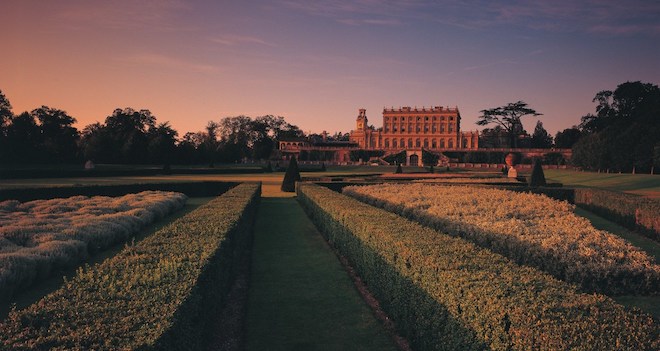 This countryside manor was once the home of Nancy Astor, the first woman to sit as a Member of Parliament in the British House of Commons. The current Grade-1 listed structure was built in 1851, following the previous two structures both of which burnt down. The Italianate architecture is evident throughout, and the Cliveden House’s grandness evokes feelings of mansions such as Pemberley in the classic romance novel Pride and Prejudice. Over the decades, Cliveden has been home to an Earl, three Countesses, two Dukes and a Prince of Wales. The estate is still popular today as a wedding location among royalty and celebrity alike, with former Liverpool footballer Steven Gerrard exchanging wedding vows with childhood sweetheart Alex Curran at Cliveden House. Key parts of the estate and gardens stretching 376 acres have also been retained including the intimate 3-bedroom Spring Cottage that rests peacefully on the banks of the River Thames and a small lake, offering the best of escapism and solitude for a perfect retreat away from the manor itself. Activities predictably include manor and estate favourites like clay shooting, archery and a flotilla ride along the Thames, but also modern twists include segway rides, art classes and escape rooms. 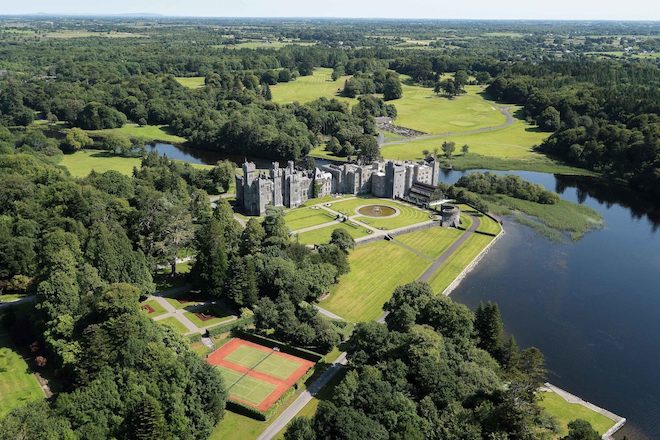 It’s not every day you get to live in an 800-year-old stone castle, with a stunning view of one of the largest lakes in the country. Formerly a home to the Guinness family (though its original history dates back more than 600 years before that), Ashford Castle combines the majesty, grandeur and timelessness of a castle with modern luxury amenities. As one of the finest sporting estates in the country, extraordinary cultural activities are curated for its guests, from country classic pastimes such as horse riding, falconry and shooting, to modern activities like golf, kayaking and zip-lining. Housing 83 exquisite and elegant rooms and suites preserved with the castle’s originality, mixed in with a splash of contemporary beauty, Ashford Castle offers a memorable and worthwhile countryside escape.

Contributed by Janice Kei for The Suite Life by Chinmoy Lad