Nobody wants to be tied up these days, especially when it comes to your cords and cables. While wireless earbuds are dominating the audio space, wireless phone chargers (also known as charging pads or charging stands) are starting to enter the marketplace as a convenient — and yes, cord-free — solution to powering up your devices.

Wireless chargers work through electromagnetic induction, sending power from your charger to your phone via coils that are housed in both units. The charger’s induction coil creates energy, which the receiver coil in your phone converts into electricity to send to the battery. It sounds complex, but it’s similar to the way you would charge an electric toothbrush, say, or power up your Apple Watch sans wires.

You’ll still have to plug the actual charger into an outlet, but your phone will be able to rest on the charging pad cable-free. Ready to get powered up?

What Are The Best Wireless Chargers?

There are many factors to think about when choosing the right wireless charger for you; below are the most important ones, which we considered while we were researching this list.

You need to have a compatible phone: In order to enjoy the benefits of wireless charger, you must own a Qi-enabled device. Qi (pronounced “chee”) is the industry standard for inductive charging over very short distances (less than 40mm). Qi-enabled charging is available on Apple iPhone 8 and up, Samsung Galaxy S7 and up, Sony Xperia XZ2 and up, among others. Bonus: many of these wireless chargers work with your Apple Watch and other Qi-enabled smart devices as well.

Form factor: Most wireless chargers come in one of two shapes: a charging pad, which looks like a disc, and charges your phone while it lays flat, and a charging stand, which props up your phone while it’s being charged. Both work the same way (transmitting electricity between a coil in your device, and a coil in the charger), but they differ in size. Charging pads are more portable, but you have to lift your phone up to look at notifications; charging stands are bulkier, but you can check your phone at a glance.

Charging speed: Wireless charging still isn’t as fast as plugging your phone in with a cable, but modern wireless charging accessories are bridging the gap. The highest charging speed currently supported by wireless charging pads and devices, is 15 watts. These chargers require a QuickCharge power adapter to hit their maximum speed, which may not be included in the box. Most Android devices top out at 10W, and the most recent iPhone tops out a 7.5W, so getting the highest power charger might not make sense depending on your device.

Phone case thickness: All of the wireless chargers we’re recommending will work if you have a case on your phone, but its thickness can reduce your device’s charging speed. 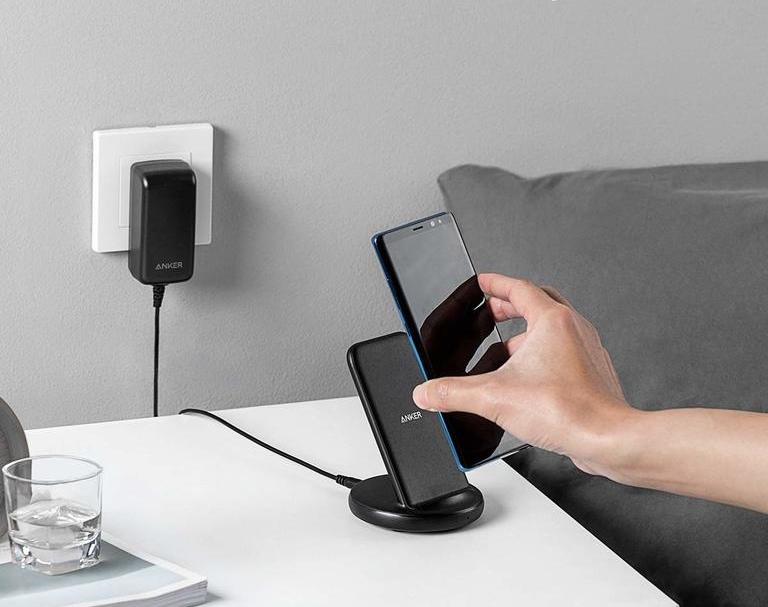 Anker’s PowerWave is an all-in-one solution for people who want a powerful wireless charging stand.

It has a maximum speed of 15W (a fast charger is included), and two coils, so you can charge your phone when it’s placed horizontally or vertically. Thanks to a feature called PowerWave, the charger will automatically switch between 5W, 7.5W, 10W, and 15W charging speeds depending on your device. Anker’s custom MultiProtect Safety System will keep your phone from overheating, or damaging its battery.

The charger is made out of a grippy, anti-slip surface keeps your phone stable, and its coils are arranged so your device stays charged whether you position it vertically or horizontally on the stand. Anker says the charger can also work even if your phone has a thick case on it. It won’t work if you use a metal case, grip, credit card holder, or magnet on it. 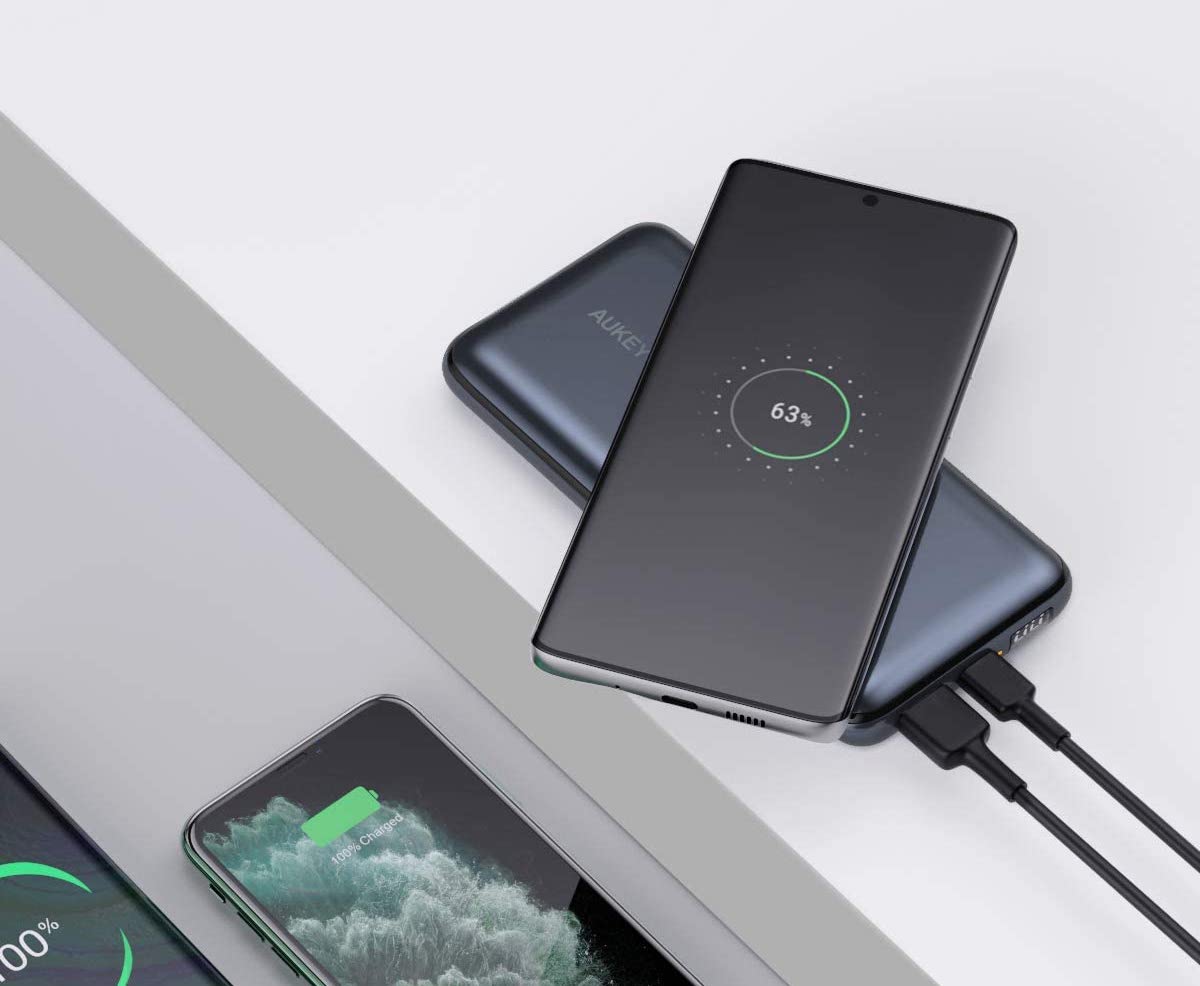 Most wireless charging pads require you to plug them into a power source, like an outlet or a computer, but AUKEY’s is built into a battery bank, so it’s totally portable. The battery pack has an 20,000 mAh battery with two USB ports (one USB-C, one USB-A), which has enough juice to fully recharge an iPhone 11 six times.

Plus, you can charge multiple devices — wired and wireless — at the same time. 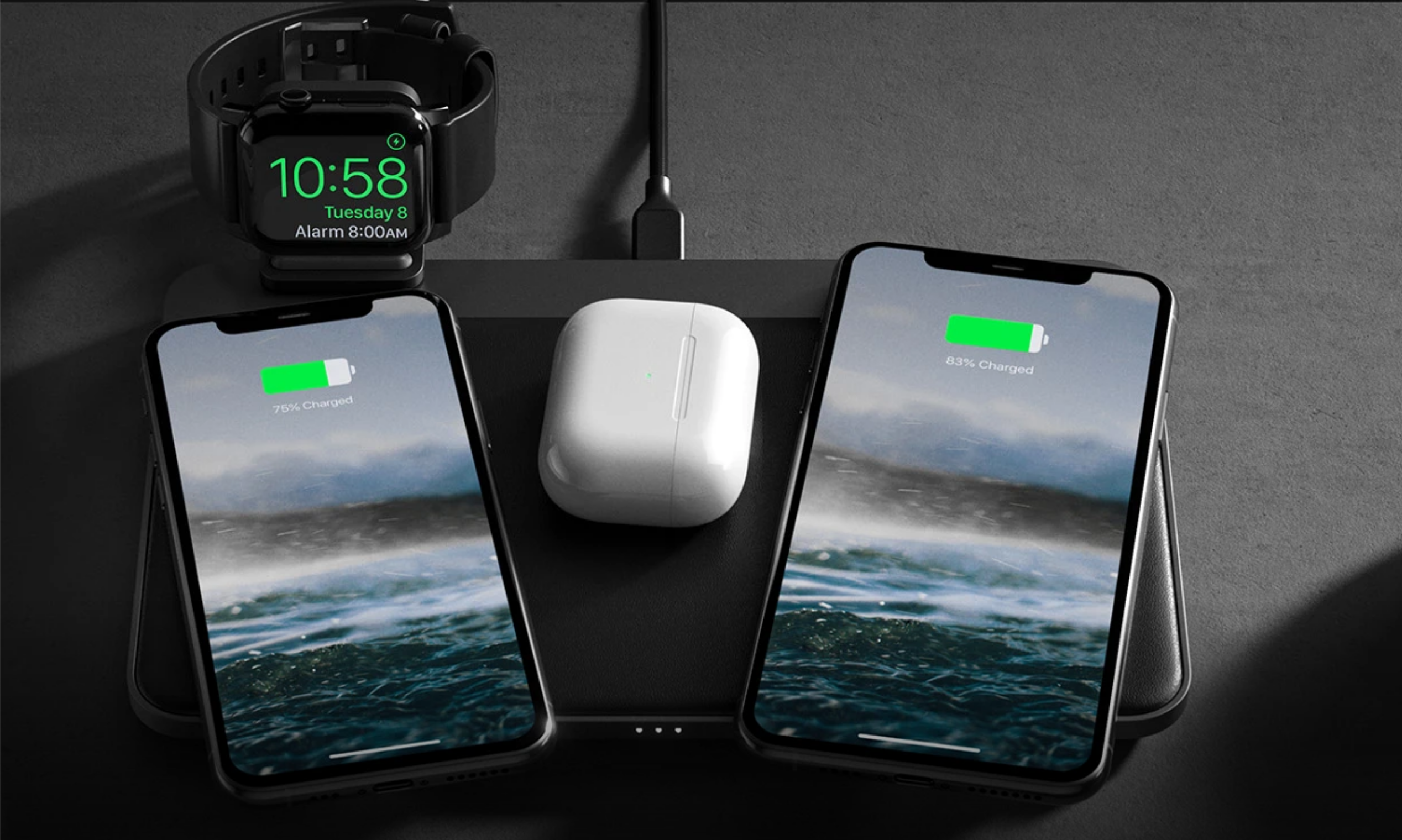 If you want to wirelessly charge more than one device at a time, Nomad’s Base Station Pro is the best option.

It has 18 charging coils beneath the surface, so you can place up to three devices anywhere you like, and they’ll begin charging. I’ve been able to test this charger for myself, and have been impressed by its performance and ease of use.

The Base Station Pro can charge devices at up to 7.5W, although the thickness of your phone case may reduce that speed. Nomad is using cutting-edge technology to make its charger work, and has said it’ll release software updates to improve this hardware over time. You will need to connect it to your computer to install updates, but I’ve gone through the process and it’s very simple.

This is a wireless charging pad, which mean you’ll have to look down at your devices when you receive notifications, but that’s a pretty small trade off considering this wireless charger’s main feature. Nomad also deserves credit for aesthetics: The Base Station Pro is jet black, with an aluminum frame and padded leather surface. It’s easily the best-looking wireless charger we’re recommending.

If you use several devices that support wireless charging, or want a single wireless charging pad that you and other people you live with can use at the same time in a communal place, Nomad’s Base Station Pro is our recommendation.

Note: Nomad is releasing an Apple Watch Mount that clips onto the Base Station Pro that will be shipping in February 2020. You’ll need to supply the charging cable, but the clip makes it easy to keep all of your devices in one place while you charge them. You can add the Apple Watch mount when you order the Base Station Pro, but it will ship separately. 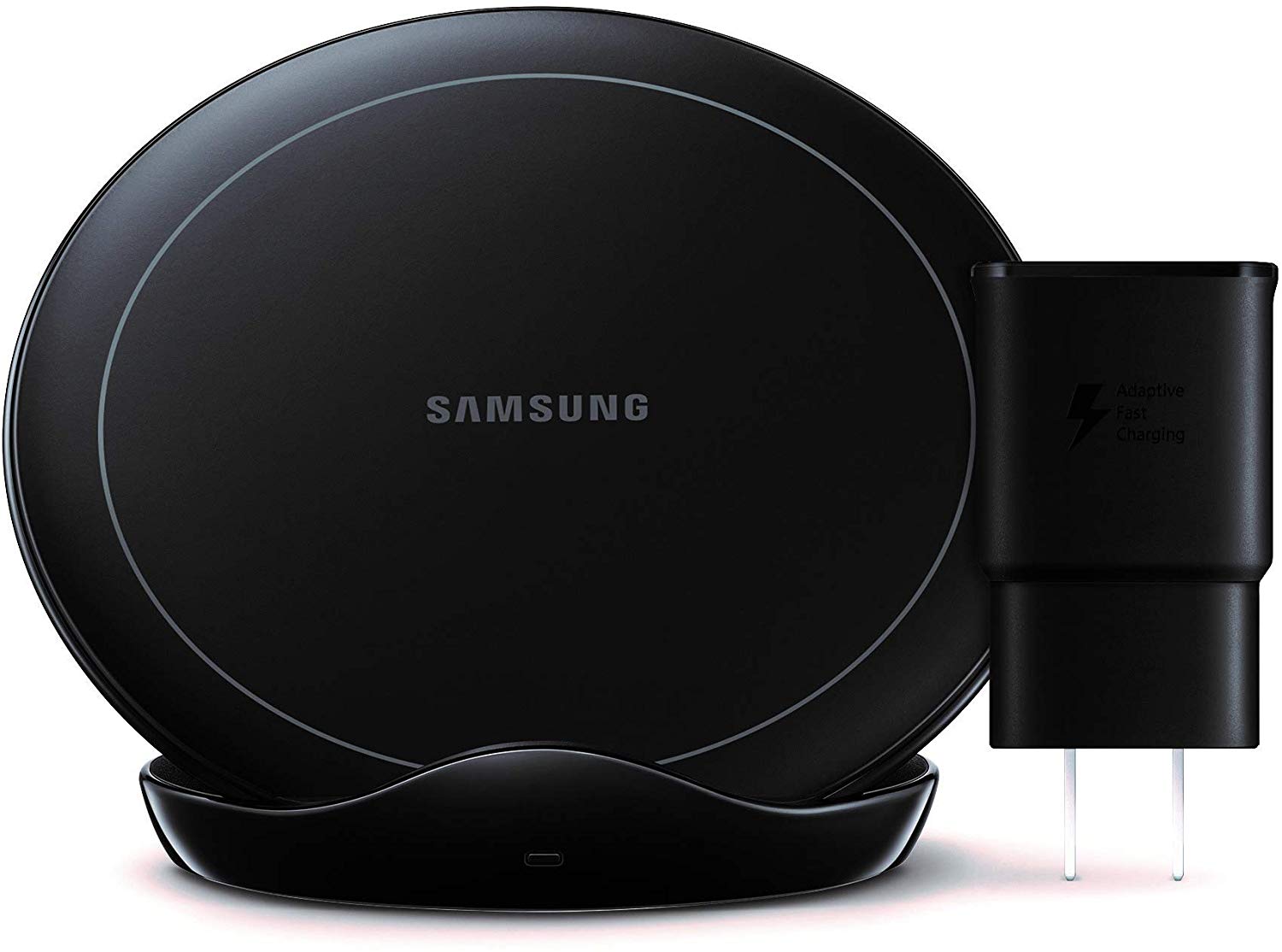 Samsung’s Fast Charge Stand is a luxurious looking wireless charger that earns points for its good looks and even better connectivity. It supports charging speeds up to 10W, and comes with a fast power adapter in the box. Its dual charging coils ensure a stronger, faster charge that spreads out evenly under the shell. What that means for you: place the phone down anywhere on the pad and in any direction without charging being interrupted.

Samsung says the charger is thoughtfully positioned to let users read texts, scroll through social media, or answer calls without having to pick it up off the stand. A discreet LED light, meantime, cycles through different colors to display your charging status, while a built-in fan keeps your phone cool while it’s charging. 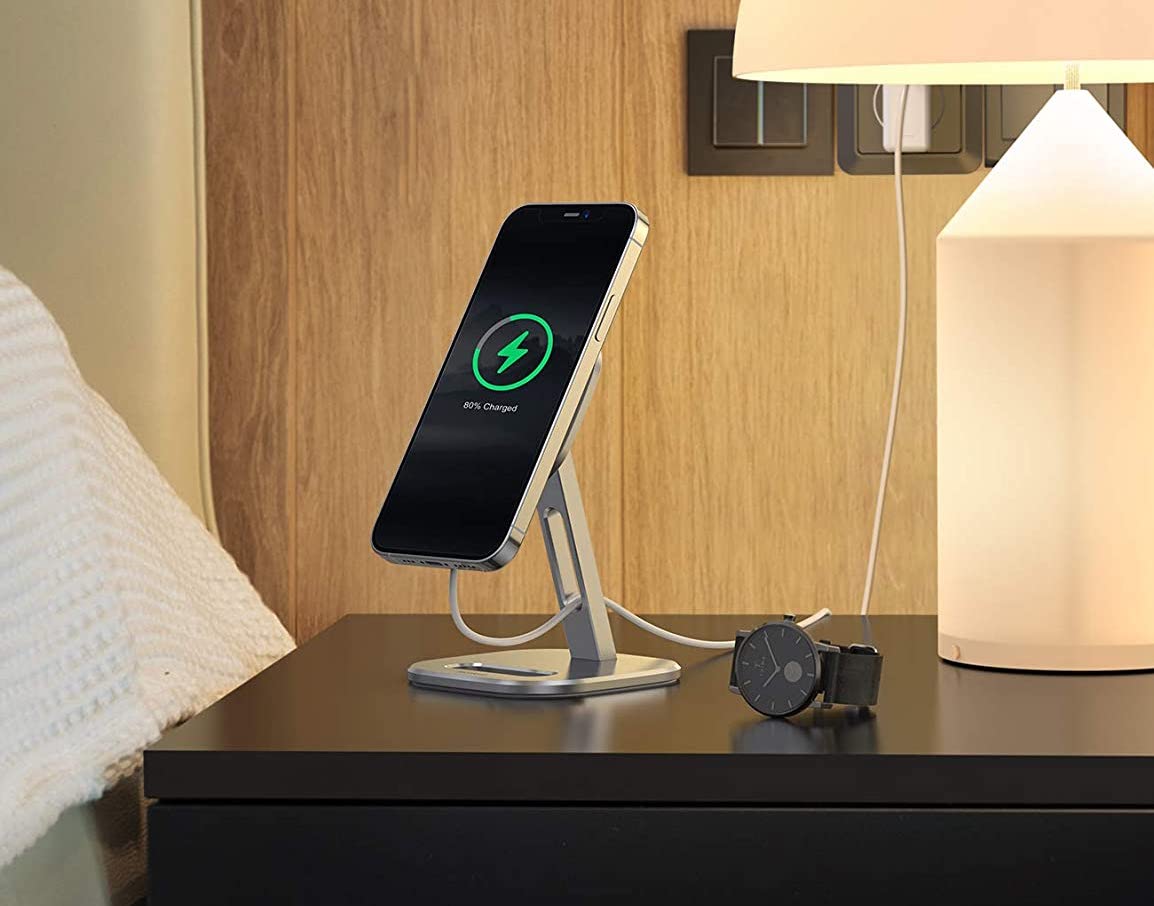 If you use an iPhone, and prefer wireless charging to using a cable, Lamicall’s MagSafe Charging Stand is the one to get. The aluminum stand is just over five inches tall, and has an adjustable top piece, so you can angle your phone just right.

To use the stand, you’ll need to get one of Apple’s MagSafe Charging pucks, which you insert into a hole in the top of the stand. The arm of the stand has a hole, so you can neatly thread the MagSafe adapter’s cable to a power adapter.

MagSafe charging is twice as fast as standard Qi charging, which is a significant improvement. You’ll spend a total of $60 on the stand, MagSafe charging puck, and power adapter, but the boost in performance is totally worth it.