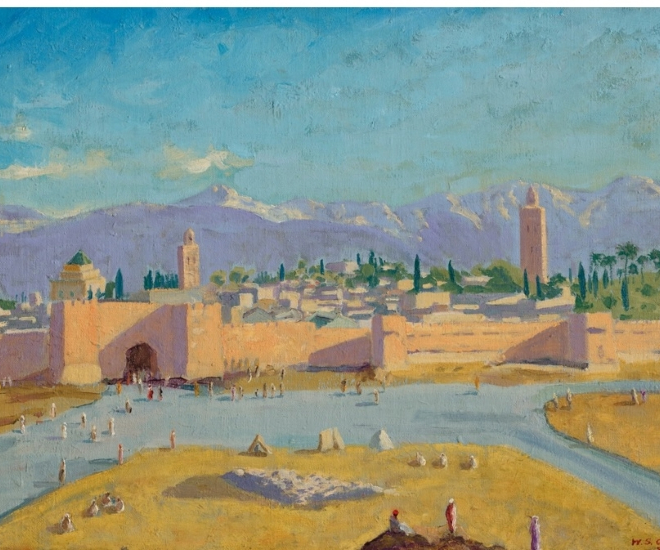 The Tower of the Koutoubia Mosque was painted by Winton Churchill after the wartime summit held in Casablanca, French Morocco. Also in attendance was President Franklin D. Roosevelt. It was at this conference that the two great leaders came to the agreement that the Allies would accept nothing short of the “unconditional surrender” of the Axis powers. Following the closing of the summit, Churchill took the chance to share the magnificent scenery of Morocco with Roosevelt, whom he considered a close personal friend.

“You cannot come all this way to North Africa without seeing Marrakech. Let us spend two days there. I must be with you when you see the sun set on the Atlas Mountains.” -Winston Churchill to Franklin Roosevelt

The two world leaders travelled 150 miles to the Villa Taylor in Marrakesh where they shared a breathtaking view of the sunset over the Atlas Mountains. It was this scenery that inspired Churchill’s only painting throughout WW2, showcasing the Prime Minister’s love for lively colours and his use of vigorous brushstrokes. It is speculated that the completed painting was presented to President Roosevelt later in January as a birthday present. Apart from being the only painting that Churchill produced during the course of the War, The Tower of the Koutoubia Mosque captured a significant moment shared by two great world leaders as they shared a brief respite from the burdens of leadership following the strategically important agenda of the Casablanca Conference.

Following President Roosevelt’s death in 1945, his son Elliot Roosevelt sold the painting to a Nebraskan collector named George Woodward. From there it was sold to film producer Norman Hickman, who worked on the 1964 documentary about Winston Churchill, The Finest Hours. Hickman decided that the painting should be shared with the world and had it displayed at the New York Daily News building in January 1965, and then at the Fulton Churchill Memorial in 1970.

Following his death, the iconic painting was passed onto Hickman’s second wife and then his stepdaughter whereafter it remained hidden in a closet for 15 years before being discovered by Bill Rau, owner of the New Orleans antique gallery M.S. Rau. Rau put up the piece for auction at $2.95 Million where it ended up being sold to actor Brad Pitt, as a gift for his then-wife Angelina Jolie. Following the pair’s split in 2016, it was recently announced that the Jolie Family Collection was putting the painting up for auction through Christie’s auction house. The historic piece of art is expected to fetch up to $3.4 Million at auction. A slight increase from the price Pitt bought the piece at. It seems that having been in the possession of one of the world’s most renowned actresses serves only to add to the painting’s already rich provenance. The Tower of the Koutoubia Mosque is going under the hammer on March 1.