Built in 1092, this London boutique hotel pays homage to Irish playwright Oscar Wilde (1854-1900) with its interior design. Located in Holborn and close to the city, this particular building was originally a Baptist church. It was only then recognised and refurbished by designer hotelier Duncan Shake­shaft and designer Jacques Garcia, who is known for his stylish Parisian hotel interiors.

With French architect’s creative vision, L’oscar is inspired by the lavishness and eccentricities of Victorian England with modern London twists. Peacock feather screens, lots of velvet, heavy expressions of blue and yellow, a seven-story chandelier that dips down over the building’s original 19th-century staircase from when it was a baptist church. 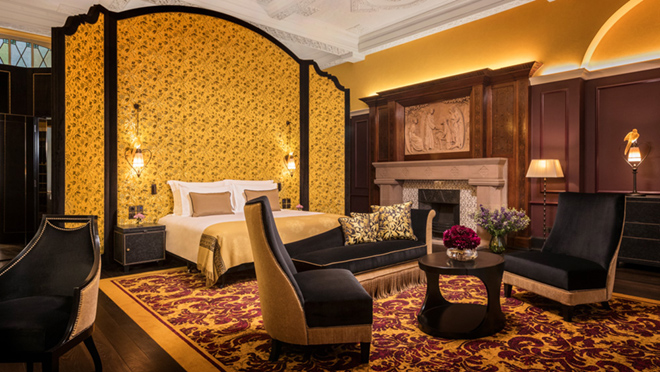 Embodying the theatrical spirit of this establishment, this is a perfect addition to London’s theater district. Garcia introduce a different layout in every room and there are 33 rooms in this building. Adhering to the colour scheme of either red, blue or yellow, the rooms are definitely a one of a kind. Bathrooms have his-and-hers sinks and toiletries laced with more perfume than the ground floor at Selfridges. In the top rooms, the rain showers can also be transformed into steam rooms at the touch of a button. Expressing its flamboyant designs of arts and craft details of the Grade II listed building, such as ornate ceiling plasterwork, bedheads with feathers, stone fireplaces and wooden panelling, as well as Biblical references, Garcia went all out with his first London hotel. Apart from its aesthetics, the boutique hotel delivers exceptional food and service. In a review, hotel staffs are dressed in shimmering copper outfit – complimenting its stunning interior. “Not ‘let-me-take-your-coat-using-my-fingertips-as-it-might-give-me-fleas’ friendly. Just joyously friendly, like you’re an old school friend. Service is also personalised, with every bedroom allocated a butler,” described a Telegraph reviewer. When it comes food, Oscar Wilde takes what he puts in his mouth very seriously. “I can’t stand people who do not take food seriously,” said Wilde, and executive chef Tony Fleming oversees what is put on the dining table at L’oscar. Offering all-day dining, be impressed by the Baptist Grill – serving British dishes with a unique spin. Breakfast is cooked to-order and there’s a wide selection of tea to try. All of what was mentioned for a price of £395 per night, including breakfast.