With the global pandemic having a stranglehold on many key markets and countries, Australia is undoubtedly not spared. In a Knight Frank property report for Australia, it was quoted, “Growth will become more balanced between the states as the downturn in residential construction weighs on activity in NSW and Victoria, while export growth drives stronger activity in Queensland and Western Australia.

While the outlook for Australia is set to improve its residential property market will weight on growth. The quarterly GDP growth picked up the first half of the year compared to the second half of 2018. While incomes have been slow or clipped, this has inevitably affected housing investment with notable sharp declines. By contrast, government spending has made a strong contribution to growth and the depreciation of the Australian dollar has supported demand for exports. 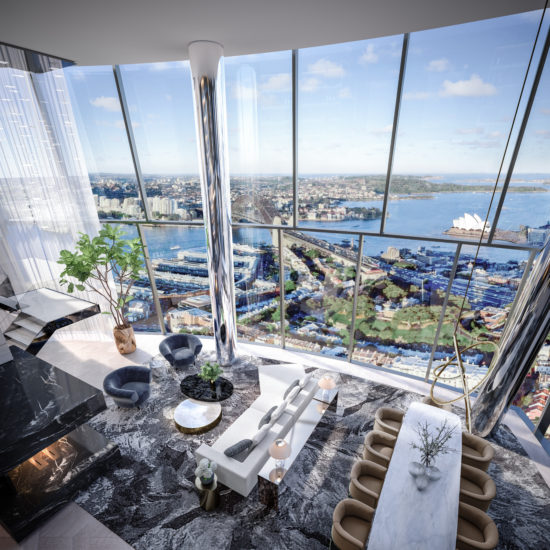 Enviable harbour views from Crown Residences At One Barangaroo

The Australia Knight Frank 2020 Outlook Report stated: “Economic growth set to improve in 2020 but remain slow. Growth in the Australian economy should pick up in 2020 as lower interest rates and the recovery in the housing market boost consumer spending but will remain slow by historical standards. Ongoing solid employment growth will support demand for office space, but the global outlook will weigh on confidence and absorption to some extent.”

Sydney Outlook
Based on Sydney Prime Residential Review Q3 2020 by Michelle Ciesielski, Researcher, Knight Frank Australia, she quips, “Many of Sydney’s ultra-wealthy population have spent their winter months at home, for the first time in many years, as international borders remain closed for travel to curb the spread of COVID-19, but buyer enquiries were strong, with price growth being recorded for the quarter.”

The average days on market for a prime property in Sydney was 82 days in June 2020; but it was 72 days one quarter ago. While prime listings for properties were thin, possibly because they were tightly held amid the economic uncertainty weighed in by the pandemic, the Sydney prime property market was still resilient. It was noted at the end of 2019, Australian ultra-high-networth individuals were expected to grow by 5.2% per annum, by the end of 2024. This was bolstered by Sydney’s prime sales performance where across its prime regions, the volume of sales in the second quarter of 2020 witnessed 359 transactions of prime properties. This was 8 per cent below the first quarter volume, however annually, up 42 per cent over the past year.

The report also conveyed its forecast: New prime development pipeline where in mid-2020, there had been 35,220 medium- and high-density new apartments and townhouses completed in Sydney’s prime regions since 2015. There will be 13,625 more forecast by the end of 2024 in the pipeline which are currently under construction or being marketed with development approval.

Challenging Outlook
Therefore, the average days on market for a prime Sydney property will be extended in the next quarter as a result of finance taking longer to obtain, despite entering an ideal spring selling season. While the new supply pipeline continues to diminish in prime regions, the city’s prime property will inevitably face a challenging economic year ahead.

While the pandemic has changed buyer’s mindsets – refocusing on priorities in life – one in four buyers based on a Knight Frank Global Buyer Survey said they were more likely to move home in the next 12 months, or perhaps, upgrade their primary residence to want more space. In terms of the City Wealth Index, it was noted that at the end of 2019, Australian high-networth-individuals are expected to grow by 5.2 per cent per annum, by the end of 2024 and Melbourne is ranked 40th  from 100 global cities.

Melbourne’s prime property regions tallied some 77 prime abodes in the second quarter of 2020. In fact, very interestingly, at the end of June 2020, with the New Taiwan Dollar ranked most advantageous for currency play when buying a Melbourne prime property with a 6 per cent discount, witnessed interest and demand. In terms of average number of days a prime property stays in the Melbourne market, it would be 90 days based on Q2 2020 data.

Melbourne’s fight during this pandemic witnessed a second lockdown, inevitably putting a lag in its prime property market, only possibly recovering in late 2021. The market may be further hindered by a solid pipeline of new supply across prime regions and heavy reliance on a weakened population growth.

Its interiors emanate sophistication and class all thanks to the Midas Touch by preeminent New York-based Meyer Davis Studio Interiors. The beautiful interiors offer a tapestry of contemporary aesthetics and modern materials and finishes that convey a chic palette. In each unit, you can witness contemporary and luxurious design elements and finishing such as European oak timber floors, ripple textured bronze glass, polished stainless steel, and stunning veined marble slabs.

Situated close to an alluring waterfront, this masterpiece embellishes the Sydney skyline and is instantly recognisable from any vantage point in Sydney. From ground to its pinnacle, this building offers 71 storeys where 82 private residences. Homeowners can choose from two-, three-, four-, and six-bedroom configurations, or the top-of-the-line is the Duplex Penthouse) sit atop 349, six-star Crown Resorts hotel rooms.

The ultra-wealthy can choose the two-, three- or four-bedroom residences, or indulge in the single 6-bedroom Duplex Penthouse. The development offers modern amenities such as in-residence dining where meals are ordered from the integrated six-star hotel. Of course, one can head down to the restaurants situated within the building. Other amenities include a state-of-the-art gym or opt to pamper yourself in the Blainey North-designed spa. Just within the vicinity of the property are many F&B and retail options to keep you occupied.

With beaches and countryside walks to partake during the weekends, it’s no wonder that Sydney snagged two accolades last year: it was ranked 5th as “Most Liveable Cities” by the Economist Intelligence Unit and 11th on Knight Frank’s “City Wealth Index”.

One Barangaroo’s easy access to the CBD is just a few minutes’ walk and the spanking-new ferry terminal in Sydney is another means of transport. The project is definitely Sydney’s most alluring waterfront and city living project. Its vantage location, coupled with the calibre of the developer, Crown Resorts, makes this prime property a once-in-a-lifetime opportunity to own.
https://onebarangaroo.com.au/

One Sydney Harbour
Renzo Piano preeminent touch on One Sydney Harbour residential project clearly stands out around the Sydney Harbour. This gleaming, modernist building comprises three buildings positioned next to the Crown Casino Tower in the iconic Barangaroo strip.

The Pritzker Prize-winning architect has designed famous building such as The Shard, The New York Times building, to name a few. The architecture main talking point is how it elegantly reflects and shimmers the sparkling water of Sydney Harbour while embracing its beautiful surrounding landscape. Piano ensured that each building would have unique treatments where different levels of reflectivity can be seen at different times of the day, akin to a shimmery crystal when it catches the light. The views to the north are most inspiring as one can witness Harbour Bridge and Opera House, as well as views west across Darling Harbour and to the Blue Mountains. The tallest of the three structures in the One Sydney Harbour development stands at 247 metres and will be the tallest residential building in the entire city. The second tower and third tower will be 207 metres and 104 metres high, respectively.

The project’s flagship penthouse is a single residence but allows an additional third floor – which forms part of the overall home – to function as a separate residence. The entire unit spans the top three floors of One Sydney Harbour’s three luxury residential towers. At 17,000 square feet of space, this penthouse offers nine bedrooms where residents will ogle at the 8-metre high ceilings. The unit comes with private roof-top pool, spa, and gymnasium, as well as a very generous master bedroom.

“We’ve been overwhelmed by the interest we’ve received. Not only have we secured more than $140 million with the penthouse sale, but a further seven whole floor apartments have been sold, proving there is significant depth in the super luxury apartment market in Australia,” says Ben Christie, Global Head of Product and Sales, Lendlease.

The property is close by to the new Barangaroo station which is part of the Sydney Metro. Future residents can enjoy world-class waterfront dining options which are all located nearby. They can also venture to the nearby parklands (i.e. Barangaroo Reserve and Hickson Park – a one-hectare green link across Barangaroo South) to enjoy a verdant respite. Not to be missed is Waterman’s Cove which is an amphitheatre-style boardwalk on the water.
https://www.onesydneyharbour.com